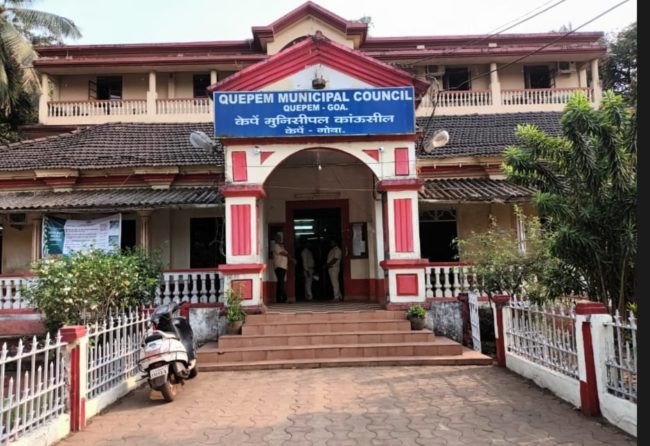 QUEPEM: Ordinary meeting of the Quepem Municipal council decides to make SOPO tax compulsory in its jurisdiction.
A series of issues from revocation of permissions of illegal structures, sewage release into the Kushawati river, hike in the salary of municipal employees, etc., were tabled in the meeting.
During this meeting, various issues were discussed of the Quepem municipality, including revocation of illegal house permissions, hike in the salaries of the municipal employees, recruitment of employees for the easy contract of the municipality, Avedem, Xeldem panchayat waste, and also the issue of sewage water from shops and hotels from the Quepem market area which is being allegedly released into the Kushawati river.
The most crucial agenda discussed in this meeting was Sopo tax for 2022-23, which was auctioned amounting to Rs 25 lakhs, but no application was received due to the covid 19 situation.
Councillor Dayesh Naik and Filu D’costa suggested re-auctioning the sopo at Rs. 20 lakhs.
Councillor Dayesh Naik requested to collect the sopo from all feast fairs, including temples. Filu D’costa and Prasad Faldesai stated to collect sopo from fairs displayed at open spaces.
Councillor Amol Kanekar informed that regarding the sopo collection of fairs at various religious places, the sopo is collected by both that is church/temples committee and municipal council/panchayat.
Another issue that grabbed the council’s attention was that in the municipal area of Igarmol, where land development has taken place, and illegal houses were given permission, they came for the discussion.
Around 200 plots have been developed and also in that area 7 houses got electricity connection told Filu. Other facilities given by the municipality should be canceled, and also they asked the municipality to take strict action shortly if such activities continue. The councilors who took this resolution in the ordinary meeting told Amol Kanekar.
After meeting council resolved to re-auction sopo at an amount of Rs 20lakhs excluding GST for 11 months.
And this meeting was attended by Quepem Municipality Mayor Suchita Shirvaikar, Deputy Mayor William Fernandes, Chief Officer Madhu Narvekar, Councilors Dayesh Naik, Fillu DiCosta, Amol Khannekar, Prasad Phal Desai, Deepali Naik, Alinda Lacreda, Jakina Dias and others.