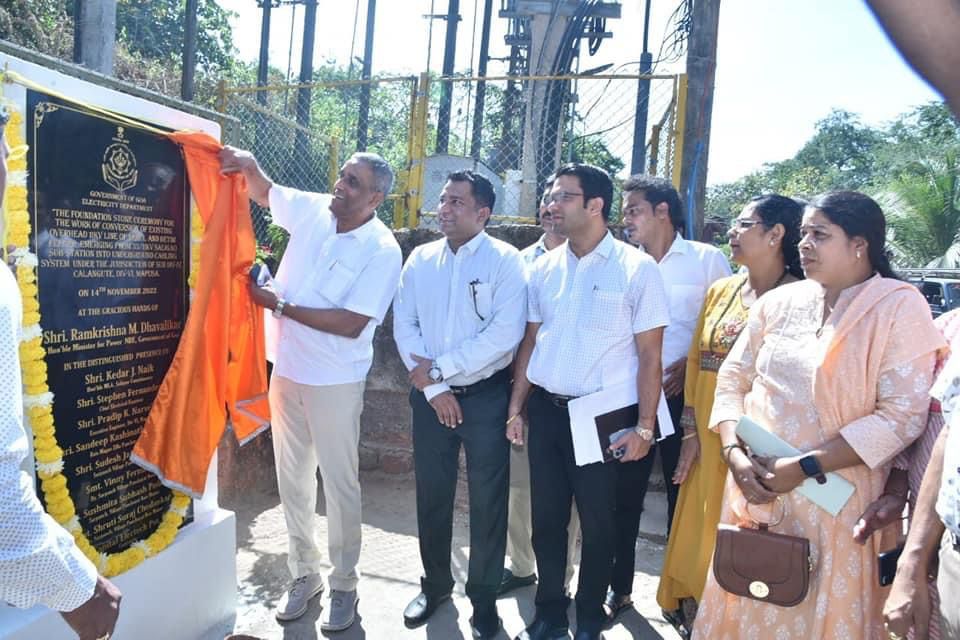 Goemkarponn desk
SALIGAO: The frequent power failures in the Saligao and coastal areas depending on sub-station could be a matter of the past as the State government began work on the underground cabling works in the constituency.
The foundation stone for the Rs 19 crore worth of underground cabling was laid by Power Minister Sudin Dhavalikar.
Saligao MLA Kedar Naik said that this was much needed as the people suffered a lot due to power fluctuation and frequent breakdowns.
“I thank the Chief Minister Dr Pramod Sawant, Power Minister and Electricity department officials for taking up the works and resolving the issue once and for all,” he said.
Meanwhile, at another function, Naik praised the Pilerne-Marra panchayat for topping the list in terms of developmental and social activities among all six panchayats in the Saligao constituency.
He was speaking at the DEEPUTSAV 2022 event near Jynan Vikas school at Nova Cidade Enclave, which was organised in coordination with former panch Karan Govekar along with panch members of Nova Cidade Enclave and PDA colony.
The MLA lauded the Pilerne-Marra panchayat for organising the event, which has brought together all segments of society.
“Pilerne-Marra panchayat tops the list in terms of development and social activities among all six panchayats in Saligao constituency. I will provide necessary support to the panchayat as well as newly elected ZP member Sandeep Bandodkar to undertake development activities in the village,” said Naik.
Guest of Honour Amita Salatry described Diwali as the brightest and the most significant festival in Indian culture, which is celebrated not only in India but in different parts of the world.