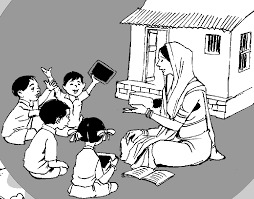 Goemkapronn desk
CANACONA: In an attempt to shift Anganwadi from the premises at Polem, two groups involved in a fistfight resulted in a brutal assault of two people, including the husband of Loliem-Polem Sarpanch at Polem in Canacona.
Sachin Bandekar (husband of Loliem-Polem Sarpanch Pratiza Bandekar) and Sameer Bhandari were assaulted in a group clash that reportedly followed after a rival faction in the locality approached the other faction over the application of a lock to the Anganwadi premises.
According to Canacona PI Chandrakant Gawas, in a fight between two groups at Polem, two persons belonging to one group were badly assaulted over applying a lock to a structure used for Anganwadi children. Acting on the complainants, Canacona police arrested Virendra Naik and Roney Fernandes on Sunday evening while several others hid.
The absconding accused persons Anand Naik, Deepak Pagi, Kartik Satarkar, Ulhas Raikar and Mukesh Naik, who earlier absconded, however, later walked-in and surrendered themselves to the Police.
All seven were released on bail after Canacona police produced them at the JMFC court.
Police applied sections 143, 506(2), 323 & 504 in the matter.
According to sources, the Anganwadi premises at Polem area, a ward represented by Loliem -Polem sarpanch Pratiza Bandekar, are annually used for worshipping an idol of Sri Krishna, a ritual held immediately after the Diwali.
This year also, after the Puja, the idol was immersed accordingly. It is said that there is a demand from ward panch and present Sarpanch Pratiza Bandekar to shift the Anganwadi to another structure. After the Srikrishna idol was immersed, the husband of sarpanch Pratiza Bandekar- Sachin Bandekar, applied a lock to the Anganwadi premises in an apparent move to close the premises and do not allowed Anganwadi in the premises. However, this has angered a few locals, and along with Virendra Naik, some of the people approached Sachin Bandekar and began questioning him for his high-handedness in applying the lock to the premises without informing anyone/or permission.
A heated argument ensued and later reportedly resulted in a brawl assaulting each attacked others. Sachin Bandekar and Sameer Bhandari were reportedly assaulted in the melee that followed.
Canacona police produced all the arrested in the court of JMFC, who released all the detained accused on bail. The Police are investigating the case further, informed PI Gawas