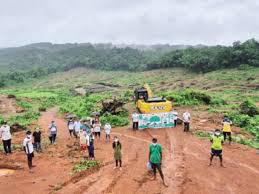 MARGAO: Social, civic issues take a backseat during this election. The three linear projects, sustainable development, self sufficiency , revival of agriculture, natural resources remained sidelined in most of the manifestoes of the politicians.
It has been surprising for the Goans especially the South Goa. Some months ago, thousands of people were agitating against the doubling of railway tracks, the Widening of the National Highway and the Tamnar power project, which went through the Wildlife.
People were against the various draconian projects and moves such as the Major Port Authorities act, Bhumiputra or the Bhumiadhikarini bill etc. There was also oppose to the Marina project and so on. But sadly, the people of Goa seems to have quickly forgotten about these burning issues which once upon a time stirred Goa and its politics.
Apparantly, many activists and people who were in forefront of such agitations entered politics. But now it looks like they too have forgotten about their initial fight and are seen pressing the agendas of their political parties during this 3l3ction time.
Unfortunately, most of the political parties have resorted to offer freebies and schemes which they feel will attract the voters. Whereas there is a need create employment with adequate opportunities for our people to get jobs in Goa. The beauty of the Goa which is on the verge of destruction needs to be preserved and protected.
Shailesh Naik, a businessman from Margao, said that instead of giving free doles to the women, the government should focus on providing women with skill training to standing on their feet rather than making them dependent on such schemes.
He further opined that people want govt to create job opportunities in Goa. Because it is not happening many are going abroad. Better facilities also need to be given to the people.
Whereas Ashraf Pandiyal had different thing to say about the present scenario. He opined that people are pretty and not talking against any government projects because they have understood that these projects are for the betterment of the people.
Ella Mascarenhas from Arossim said that we don’t need these freebies from the government which are actually out tax payers money. They should focus on doing sustainable development and creating job opportunities. Why should our educated youths be under these politicians?just for the promise of jobs?. Many issues over which several agitations took place in Goa are nowhere in discussion these days which is really surprising” she added.