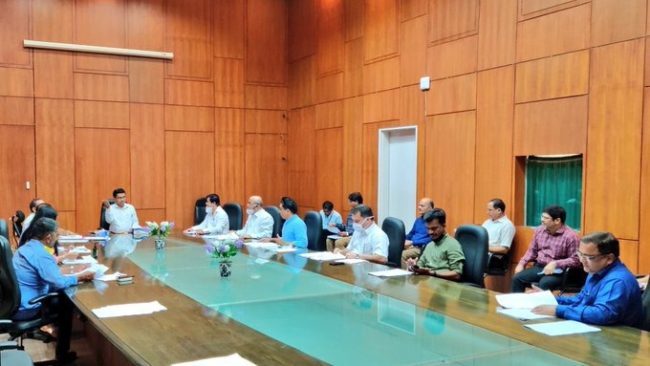 Goemkarponn desk
PORVORIM: The infighting in the BJP, which became a regular affair these days on Wednesday, entered the corridors of power as Ministers Michael Lobo and Nilesh Cabral took an aggressive stance.
While Lobo took off on the Tourism Minister Babu Azgaonkar over the Aguada jail Maintainance outsourcing issue, Cabral was upset with Chief Minister’s office IAS Ashok Kumar over a pending file of his department.
Chief Secretary siding with the IAS officer instead criticised Cabral.
Cabral, speaking on some pending file, blamed Ashok Kumar for the delay. CS Parimal Rai intervened and said, “Minister cannot use such tone against an IAS officer.”
The matter continued to drag on until the CM, Dr Pramod Sawant, and other ministers intervened to bring the situation under control.
Lobo took a strong objection to the proposal of Tourism Minister Babu Azgaokar to hand over Aguada Fort for maintenance and operation for the annual fees of Rs 1.20 crores.
Azgaokar strongly defended his proposal, stating that all the legal requirements are met before finalising the proposal.
According to Lobo, CM Sawant and Dy CM Babu Kavalekar were convinced by his fears with regard to the proposal and decided to defer it.
“I smell a rat in the proposal, which can eventually lead to the historic monument going in the hands of the private party”, he said.
He said that the annual Rs 1.2 crore fees that the government will earn from the transaction is extremely low compared to the potential at this historical monument that was renovated by the Central govt by spending Rs 35 crores.
Meanwhile, Tourism Minister Babu Azgaokar refuted that there was any hanky panky in the contract and that the govt would cancel the contract if any fraud was noticed.