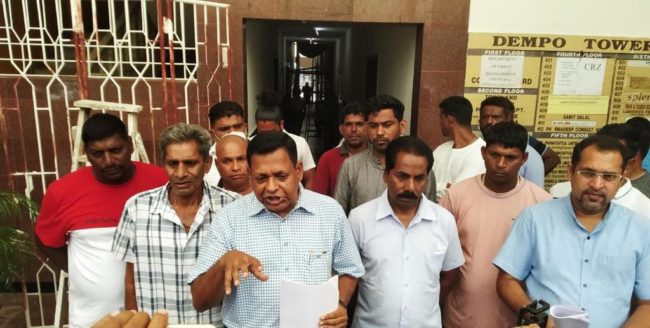 PANAJI: Khariwada fishermen have raised a strong objection to GCZMA officials’ visit to the fishing village at the behest of MPT. They also raised strong objections to the unlawful activity against the interest of the fishing community.
The fishing communities include Goa Fishing Boat Owners Association, Vasco Fishing Boat Owners Marketing Co-operative Society Ltd, Zuari Fishermen Marketing Co-operative Society Ltd, Old Cros Fishing Canoe Owners Co-operative Society, St. Francis Xavier Fishing Canoe Owners Co-operative Society, Baina Fishermen Society, St. Andrew Canoe Owners Fishing Society, Baina Ramponkar & Fishing Canoe Owner Society, and other Residents of Khariwada belonging to the fishing community submitted a memorandum to the GCZMA Member Secretary, and CC has been sent to the Chief MInister, Environment Minister and the Fisheries Minister.
“It is with great sadness, anger and anxiety that we are forced to write to you about the suspicious, unannounced visit of your team of officials from the Goa Coastal Zone Management Authority to our fishing village Khariwada, Vasco on April 12, 2022. The visit of the GCZMA officials was neither known to our elected municipal councillor from our ward nor the fishing community from Khariwada,” the memorandum said.
They further said that on realising that the team had arrived in the village, we rushed to enquire about the purpose of their visit; it was then that we learnt that the team had come at the request of Mormugao Port trust or Mormugao Port Authority to carry out some inspection of a proposed POL jetty at Khariwada.
“Being the fishing community that has been residing in Khariwada since time immemorial and the very name of the fishing village being derived from the word “KHARVI”, which means FISHERMEN, we become the main stakeholders of Khariwada. And hence, any project or activity related to our fishing village or affecting our fishing community and our livelihood can be undertaken only after taking our community into confidence by explaining the purpose of any proposed activity and its repercussions on our community and our very livelihood/existence,” they said.
The delegation recalled a public hearing held in April 2017 at Tilak Maidan, Vasco, related to three destructive projects. After that, another Public Hearing was held
in2018 at SAG ground, Chicalim, about another destructive project at Khariwada.
“In both these cases, the fishing community residing at Khariwada as well as people across Goa had participated in the Public hearing and had unanimously opposed the destructive projects tooth and Nail. Thousands of people who had participated in the Public Hearing had opposed
the said destructive projects as it involved the demolition of our houses and total decimation of our fishing village,” they said.
Despite the passage of 4-5 years since the Public Hearings, they are yet to be informed about the objections, apprehensions and queries raised during the Public Hearing and written submissions given to the authorities.
“Hence, on April 12 2022 at about 12:00 hours when we learnt from your GCZMA team of officials that yet another destructive project is being proposed, which we fear is aimed to annihilate our fishing village to help the crony capitalists to bring coal into Goa, we raised strong objections with your officials that had arrived because we as the main stakeholders are kept in the dark and unaware of the danger lurking against us, and that too by GCZMA, the very authority that is supposed to protect the interests of the fishing community and
other communities living along the coast as per the CRZ notification 2011 passed in the Parliament,” the memorandum stated.
They said that the activity for which your team of officials had come to Khariwada on April 12 2022 is highly suspicious, surprising and in total contravention to the undertaking by the government to the Hon. Bombay High Court and may likely amount to contempt of court.
Copy of the Bombay High Court order is placed at enclosure for ready reference.
“In view of the above, we as the members of the fishing community of Khariwada, being the main stakeholders, request you to kindly desist from any unlawful activity that is in contravention of the law as well as against the interests of the fishing community. If any activity is being planned, we demand that we should be taken into confidence and our views should be taken into account,” they said.
“Any activity or discussion to be undertaken or initiated with respect to the interest of the fishing community should be done by taking our fishing community from Kharviwada into confidence,” they said.