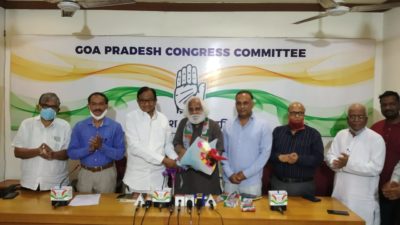 PANAJI: AICC Senior Election Observer for Goa P. Chidambaram today said that the TMC and Luizinho Faleiro quitting the Congress is an old issue and that the party is getting battle ready for up coming elections.

“I don’t want to answer anything as TMC and Luizinho Faleiro quitting the Congress are older issues. Congress party is getting ready for elections,” said Chidambaram

He refused to talk about the possible alliance with the like-minded parties for the next year’s Assembly polls, saying that his mandate was only to restructure and revive the state unit of the party ahead of the elections scheduled in February 2022.

Chidambaram said that the people of the state should believe in the Congress as it is the only option for the people and provide job opportunities, business environment and most importantly, deliver good governance to Goans.

“We as a Congress party will get the party ready to fight elections in all the 40 constituencies.” He said.

“I have joined the Congress party to save Goa from the decisive BJP rule, I have not demanded anything, I want my Goa to be saved,” he added

Goemkarponn Desk Panaji: Aam Aadmi Party has condemned the recent assault on a senior doctor in Porvorim. Expressing shock at the lack of action in ... Read More

NEWER POSTGovernor P.S Sreedharan inaugurates a Jackfruit Garden Raj Bhavan
OLDER POSTDecision on BJP-MGP going together will be taken only after discussion: CM