To SAVE tigers; tourists should be BANNED in Sattari waterfalls 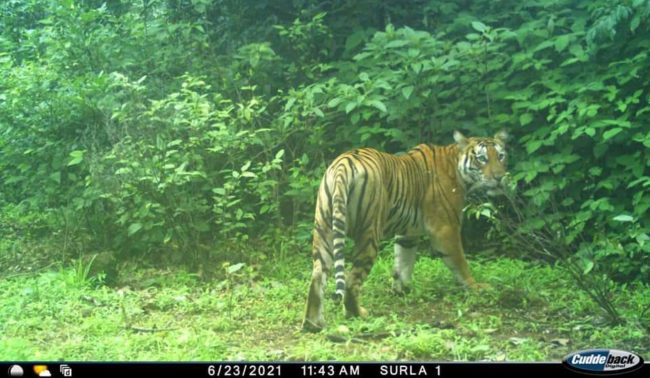 Goemkarponn desk
VALPOI: Tigers are an important component of biodiversity, and hence it is essential to protect them as currently, the number of tigers in the state and the country has decreased.
Now, after a tiger was spotted in Sural village of Sattari taluka recently, the Forest Department is facing a new challenge to protect the tigers, after the bizarre incident of five tiger deaths in January last year.
Most important is that the Forest Department needs to strictly enforce the ban on tourists on waterfalls in the forest.
Rajendra Kerkar, an environmental researcher, has said that it is very important to recruit skilled workers in the Forest department to protect and manage the tigers.
He also demanded that the government pay special attention to the conservation of tigers after the existence of tigers at Surla Sattari was proved.
A total of 3 tigers have already been proved to exist in Surla areas, he says.
“The existence of a tiger has been captured on camera, and as we know now, there are three tigers in these areas. Therefore, the Forest department needs to build skilled manpower while creating the necessary infrastructure,” Kerkar said.
In January, five tigers were killed in the Dhangaworkforceea of ​​Golvali in the sanctuary area of ​​Sattari taluka.
The investigations have revealed that the tigers were responsible for killing the cattle of the Dhangar family in the area, and in retaliation, they were poisoned by a few people.
Kerkar said that the waterfalls that fall from the hills of Sattari taluka during the monsoon season are a unique attraction to tourists now.
“The waterfalls are visited by many tourists as well as locals for fun, but it causes a great deal of damage to the environment. Wildlife habitat is endangered due to this. If that happens, the Tigers will not have a chance to roam freely in the dense forest, and there is a possibility of tourists being attacked by them if their habitat is violated. Special attention should be paid to this aspect,” he said.
He said the forest department lacks skilled personnel to protect and manage the tigers.
“This can lead to many problems. Soon the forest department should recruit skilled workers and launch a special campaign to protect the tigers,” he said.
Kerkar also said that it was essential to monitor the movement of tigers using watchtowers set up in the sanctuary area.