Truck parked for border verification slips back, falls on a roadside gorge at Polem 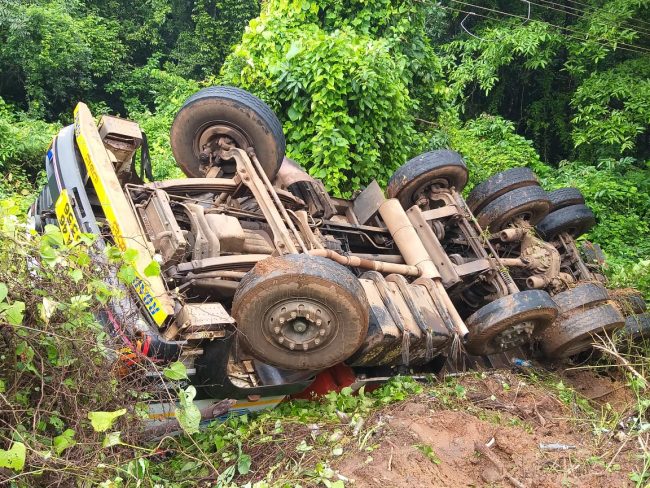 CANACONA: A loaded truck parked at Border Checkpost rolled back and slipped down the roadside gorge at Polem early Friday morning.
According to the truck driver (who identified himself as Shariff) proceeding towards Karwar, stationed/parked the truck bearing registration number KA-46 5356, kept in running mode(Neutral mode), applied the handbrake and went to RTO office for documents verification, but on return found the vehicle is missing, only to realise the vehicle had rolled back in reverse for over 150 metres and fell down in the roadside gorge.
Luckily, the cleaner who was seated in the vehicle escaped unhurt even though the truck travelled in reverse all by itself on the NH-66 road and travelled another 50 metres on the side of the road before it fell down, turned turtle and came to rest upside-down fully exposing all it’s 12 tyres up in the air.
In yet another luck, no other vehicles nor any pedestrian on the NH-66 road came on route/road blindly taken by the driverless truck.
The incident reportedly took place early morning at about 06.30 am on Friday.
When asked truck Driver said, he had well applied the handbrakes while alighting to proceed to the RTO office, ‘but on return, I found the truck with cleaner sitting in the cabin gone missing. On closer look, I found the vehicle had gone in reverse and fell down the road. A cleaner who was in the truck, however had no injuries ‘
When asked why the vehicle was not shut down and kept in gear besides applying the handbrake, the driver said, just because the vehicle was hot, it was not put in gear to allow the vehicle to cool down a bit’.

Goemkarponn desk QUEPEM: The state government, in its circular, has mentioned that school uniforms are not compulsory. Some schools in Quepem taluka, like Don Bosco ... Read More

CM says elections are unavoidable; needs to be held; utmost care to be taken