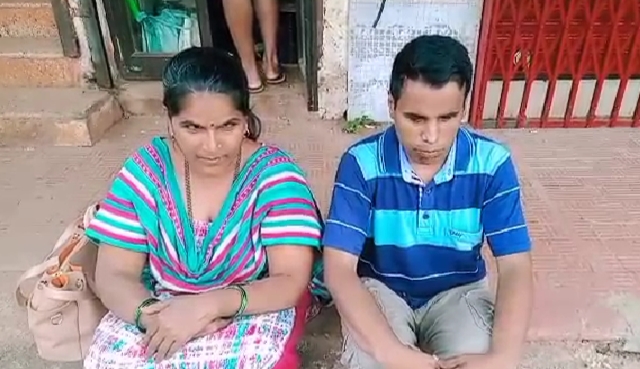 Request Chief Minister to give him a government job for his livelihood.
Says he tried for govt jobs and even applied for the shop at New KTC Bus Stand Marcel but did not get a response.
Local MLA and Minister Govind Gaude said he is sympathetic to their agitation he will make every effort to fulfil his demand. Says there are jobs for the physically disabled person and that he should apply at proper forums.

PONDA: As warned by him on April 20 last month, the visually impaired Santosh Uttam Nageshkar (42) from Deulwada, Marcel, has begun his hunger strike near Tivrem –Vargao Panchayat at Marcel along with his wife, demanding Government provide him with either government job or shop for earning a livelihood.
He requested Chief Minister Pramod Sawant, Union Minister Shripad Naik and Sports Minister Govind Gaude to give him one government job from the quota of physically handicapped to earn his livelihood.
It might be recalled that Santosh had earlier, with no source of income left for livelihood, had warned Government to go on strike from May 9 onwards if he was not given a government job or shop to earn a livelihood.
As there is no sign of support from the Government, he started hunger strike agitation today. Santosh said he had tried for government jobs, including telephone operators jobs at GMC, besides applications for other jobs, but he did not get any chance.
He even recently tried to get one shop at the new Marcel Bus Stand and earlier met Minister Govind Gaude but without success.
He said his family is struggling to earn a livelihood, and his financial situation is critical; he is presently working in Mumbai at a call centre 1098, which will merge with police number 112 very soon. Thereafter he will be without a job, and without a job, he will have to starve, and so he started his agitation.
Meanwhile, when contacted, local MLA and Minister Govind Gaude said he is sympathetic to their agitation he will make every effort to fulfil his demand.
He said there are also jobs for physically disabled people in Goa Government and that he should apply at the right forums to fulfil his dream.