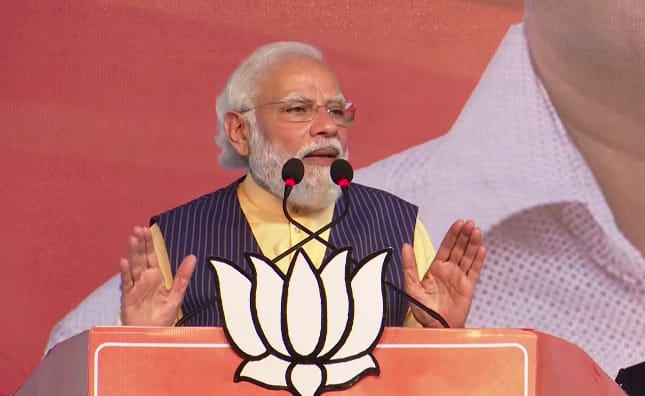 MAPUSA: Prime Minister Narendra Modi today urged the people of Goa to vote for the BJP to make Goa a golden State.

PM Modi also slammed the Congress for failing to give importance to Bardez Taluka.

“The people of Goa will vote for development and this will help us the state as a golden Goa,” said PM Modi while addressing a public meeting at Mapusa

Hitting out at the Congress, PM Modi talked about how the grand-old party failed to liberate Goa for nearly 15 years after Independence.

“People of Goa kept fighting but Congress government didn’t help. From the ramparts of Red Fort, India’s first PM, Jawaharlal Nehru, had said that he won’t send forces for the liberation of Goa,” PM Modi said.

He further said that whenever I come to Goa, I always miss my dear friend Manohar Parrikar.

“You Goans must have felt his absence even more. I’m fortunate to be standing here because of the love from the people of Goa,” said PM Modi

Modi claimed that the work done by the Bharatiya Janata Party (BJP) government was needed ages back.

“BJP started a new development initiative for Goa’s infrastructure development. More than 100 inter-city electric buses project have been approved. Goa Tourism is moving ahead and India’s economy too is moving.” he added

The PM attacked the previous governments saying, “Earlier governments just didn’t think about infrastructure development and ruled for 5-6 decades. Even in the centre, many governments came to power, but did any govt realise the importance of Goa other than the BJP. Those governments only remembered Goa for roaming and having fun.”

Further, he said, “Today, the tourist inflow has increased owing to initiatives by BJP. 365 days a year there is tourist inflow. During congress rules, only 25 lakh tourists used to come, but today more than 80 lakh come through the year.”

Talking about recent times, PM Modi discussed how Bardez Taluka was ignored by the Congress during their tenure. He also revealed how development under the BJP had helped multiply tourism by a great margin.