Who will be KING-MAKER in Salcete? 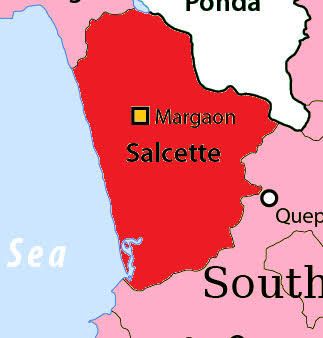 MARGAO: The clouds of uncertainty seems to be present over the Salcette taluka after the polling day. With the trend of “change” wave which took over Goa this assembly election will surely going to affect the outcome of the election in Salcette too.

The most vibrant taluka of Goa which is Salcette is not exception from the affect of change wave which hit Goa few days back. Several regional, national political parties including Trinamool Congress party, Nationalist Congress party, Aam Aadmi Party, Congress party and the BJP, including some independent candidates contested election hoping that people will chose them. After the active participation by the people of Salcette and good percentage of voting in all constituencies of Salcette including Nuvem, Fatorda, Curtorim, Margao, Navelim, Benaulim and other constituencies, it is really difficult to predict who will win.

In Nuvem, post poll talks among the people were that there might be a chance for Alex Sequeira or for Wilfred D’sa. It is tough to decide since each candidate have their own vote bank in certain areas. The voting in Nuvem constituency was satisfactory which came ilupto 75.8 percent.

In Fatorda, it was a straight fight between the BJP’s Damu Naik verses Goa Forward party supremo Vijay Sardesai. Voters standing in a queue in Fatorda also said that the good governance is needed with the representative who will listen to the people and will bring the development which the people want. In Fatorda overall percentage of voting was 76.69.

In Curtorim constituency, it will be interesting to see who has got the edge this time. The former Congress and TMC leader Alexio Reginaldo had to face the music after he exited Congress and the TMC few days before election which has surely backfired him. People from Curtorim although feel that due to the personal rapport with the people of Reginaldo. One cannot deny the presence of AAP in Curtorim and in some parts like Raia, Maina area Domnique Gaonkar seems to have got good support from people. In Curtorim constituency 70.29 percentage of voting happened.

In Margao too, it is direct fight between BJP verses Congress party. Babu Azgaonkar verses Digambar Kamat. But on the polling day Kamat showed extraordinary confidence that Congress will triumph in Margao. Similar picture was also seen at Moti Dongor area wherein Azgaonkar had to walk around in a frustration after sensing unfavourable wave of “change”. At that moment it looked like Azgaonkar must have wrongly interpreted the wave of change to BJP. It will be not so easy for Digamabar Kamat too in Margao since the TMC candidate Mahesh Amonkar is also strong in few pockets of Margao. The winning margin etc of Congress and BJP candidate will mostly depend on the change wave in Goa and also on the how much votes the TMC candidate will fetch in Margao. In Margao constituency 74.84 percentage of voting took place.

In Navelim too, there was a fight between TMC Valanka Alemao, AAP candidate Pratima Coutinho. Then there are BJP, Congress and Independent candidate like Avertano Furtado who has won election in the past. On the polling day, there was some controversy at Davorlim wherein Coutinho alleged that some family members of Valanka Alemao are distributing money to the voters. Police force was pressed at the location to bring the situation down. It is unclear that who win win here. There was 72.8 percent voting took place in Navelim.

In Benaulim, it was straight fight between AAP Venzy Viegas verses TMC Churchill Alemao. The recent alleged sting operation against Churchill will surely going have its impact on the voting patter. The AAPs Venzy Viegas has received a good response from the voters. In Benaulim 70.2 percent lowest voting took place. The people in Benaulim also prominently told that this time they are going to vote for the change and they want a representative who would bring development and benefits to the constituents.

So the overall picture in Salcette is that, people have opted for a “change”. Most of the political leaders have cleverly interpreted that change as per their convinience. But on March 10, the actual change which people have asked will be unfolded.