Will contest only on BJP ticket but party has to decide: Clafasio 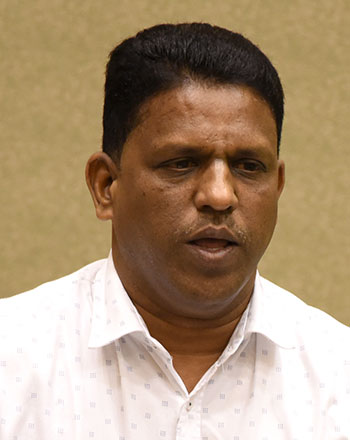 Goemkarponn desk
MARGAO: Cuncolim MLA Clafasio Dias said that he intends to contest the forthcoming Assembly elections on a BJP ticket and added that it was for the party to decide his candidature.
“I want to contest on BJP ticket, but the party has to decide whether it wants to give the ticket to me or any other candidate,” he said.
He said the BJP is happy with his work as he has given equal weightage to the constituency development and the party expansion in Cuncolim.
“I have faith in my party leadership, and coming elections, party candidate will definitely win in Cuncolim,” he said.
When asked about others claiming BJP ticket, he replied, every karykarta has the right to claim a ticket.
“Claiming ticket and getting a ticket is different. Party will do a survey they will see the work and then only will give ticket. I have done lot of work. Only due to Covid it got, but now as the pandemic subsides, I will speed-up the work soon and complete all the promised works,” he said. He also said that BJP has a base in Councolim, plus his votes will easily help BJP register win in the coming elections.
“For me, my people and voters are essential, I decided on joining BJP, taking my people and voters into confidence. I joined BJP for development. If today I were in Congress, the development would not have happened,” he stated.
Clafasio added, “I have nothing to do with the ones who are posting unwanted things on social media against me. My people have elected me, and I am sure they are with me”.
He said the BJP party leaders are optimistic about his candidature and have asked me to work
“I won’t contest elections on any other party symbol or as independent,” Clafacio signed off.