Says Sena will contest in 22-25 constituencies in Goa Elections 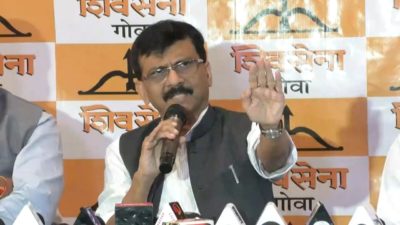 Goemkarponn desk
PANAJI: Shiv Sena Leader and MP Sanjay Raut today announced that it will shut down casinos in the state once they form the next government.
Raut also said that they are looking to contest elections in 22-25 constituencies in Goa.
“We will shut down casinos in Goa once we form the next government; we are not in favour of the casino. BJP has failed to keep its promise on this issue; they are mum,” said Raut addressing the press conference in the city.
He further said that the Shiv Sena is planning to contest elections in Goa individually and not with an alliance.
“We will contest elections in 22-25 constituencies, and our groundwork has already begun; people are looking for an alternative and change,” he said.
He further said that if Bengal’s TMC can contest in Goa, So can Maharashtra’s Shiv Sena.
“Shiv Sena will contest 22 seats. We will give it all. We do not want an alliance. Our organisation is strong enough. If Trinamool Congress from Kolkata can contest in Goa, then Maharashtra is right alongside. You have seen how well we have performed in Maharashtra,” Raut added.
Raut said that people from Goa have seen how well we have performed in Maharashtra.
Raut also said that if elected to power, the Shiv Sena will replicate the Maharashtra governance model in Goa.
“The kind of work carried out by the Shiv Sena in Maharashtra, we will work in the same way in Goa. Shiv Sena and Goa share an emotional bond,” Raut said.
The Shiv Sena leader also said that the party had received no proposal for an alliance from any political outfit in the state.
The Shiv Sena leader also projected Maharashtra CM Uddhav Thackeray as a national leader. He said, “Thackeray can lead the nation, and as the chief minister of Maharashtra, he automatically becomes the leader of the country.”

PORVORIM: Total number of 589 drugs cases registered have been registered in Goa under NDPS Act, for the period from year 2018 to 2020. In ... Read More

Goemkarponn desk VALPOI: The heavy rains in past one week have had a significant effect on the weekly Valpoi market Due to the poor response ... Read More