Rozgar Mela is a step to accord the highest priority to employment generation in the country: Union MoS Shripad Naik 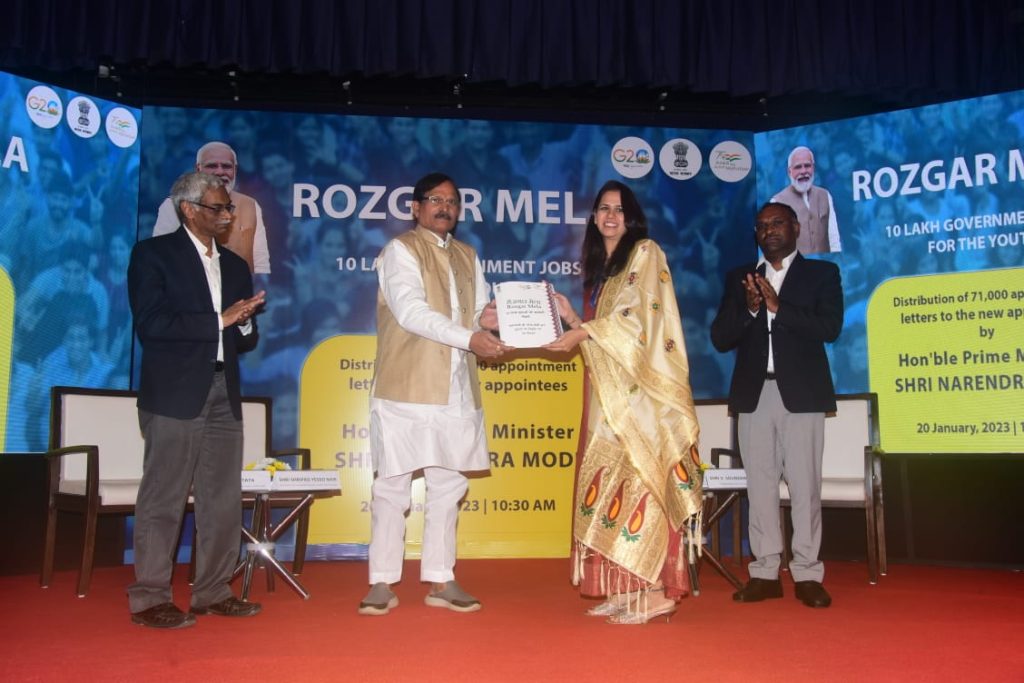 PANAJI: Union Minister of State for Tourism and Ports, Shipping and Waterways Shripad Naik handed over appointment letters in a Rozgar Mela event held in Goa today.
25 appointment letters were handed over to newly inducted recruits as part of the 3rd tranche of recruitments under Rozgar Mela.
The new recruits will join various departments like Goa Shipyard, Employees’ State Insurance Corporation, National Statistical Office, Konkan Railway, and Mazagon Dock Shipyard. Panaji Mayor Rohit Monserrate, Pune Region Chief Commissioner Customs) S. M. Tata and Commissioner Goa division V. Soundararajan were present on the occasion.
Addressing the gathering Union Minister Shripad Naik said that Prime Minister Narendra Modi has always emphasized employment generation.
He further stated that leveraging technology for citizen-centric innovation and attracting investments in various sectors of the economy will naturally lead to the generation of gainful employment.
The Rozgar Mela is a step to accord the highest priority to employment generation in the country, he added.
“Initiatives like Startup India, Make In India, Production Linked Incentives Scheme and Skill Development programmes proved to be major contributors in employment generation”, said Minister Shripad Naik. Rozgar Mela is expected to act as a catalyst in further employment generation and provide a meaningful opportunity to the youth for their empowerment and participation in the nation’s development directly. Mission mode recruitment drive is expected to result in the filling up of 10 lakh jobs in a year, and it is also expected to lead to the job creating of an atmosphere in the private and public sectors.
Chief Commissioner S.M. Tata highlighted various government initiatives to empower the youth. “Government’s proactive role is helping lakhs of young men and women empower themselves through employment. Rozgar Mela is an innovative concept to boost employment opportunities in the country”, he said.
The 3rd Tranche of recruitment under the Rozgar Mela has seen 71,000 employment letters being distributed at 45 locations throughout the country. The event saw Prime Minister Narendra Modi address and interact with beneficiaries virtually.