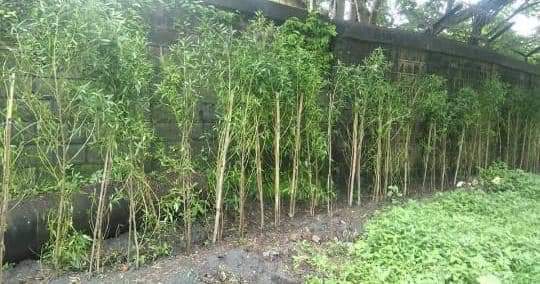 Goemkarponnd desk
Mormugao: In a shocking development, the Dy Conservator of Forest has alleged that 3000 saplings in Mormugao have gone missing with six month of being planted.
The DCF has further said that the offence cannot be investigated by the Forest department and required to be enquired by some other agency.
He has marked the CC of the letter to the Directorate of Vigilance, Altinho.
The enquiry has been ordered following allegation made by one Damodar Divkar of Mormugao.
“As alleged by the Complainant around 3000 trees were planted in the monsoon of 2019 and the same were found to be missing within a period of 6 months. Accordingly, the site from pilot point Head land Sada to Cine Elmont. Vasco was inspected by Sub Divisional Forest Officer, Quepem on 12/01/2021 alongwith the Complainant. Copy of the inspection report enclosed,” Anil Shetgaonkar, Dy Conservator of Forests, South Goa Division said in the letter.
He further said that on inspection it is found that majority of the saplings are missing and very few saplings are seen on the entire stretch of the plantation site.
“Photos of the site alongwith the GPS location is enclosed. Further, it is found that the road side plantation was solely carried out by the Mormugao Port Trust,” he stated.
He further added, a similar email complaint was received by this office on 20/08/2020, forwarded from DCF(HQ) Panaji, from the same complainant.
“Accordingly, site inspection was conducted by Range Forest Officer. Mobile Squad, Margao on 02/09/2020. It was reported that only clearing of saplings were done and since the same do not fall under the preview of definition of tree, no offence was registered. The same was informed to the complainant vide this office letter No. 3/1/TMB-M.S/Complaint DCF(Sy/2021/418 dtd. 23/10/2020,” he stated.
Moreover, he added, it is to inform that these saplings planted by MPT along roadside do not qualify the definition of Tree’ under PTA 1984, hence action under PTA 1984 cannot be initiated.
“The grievances of the applicant has to be dealt by other agencies as damages/theft carried out by whoever involve in this act. This cannot be investigated under Forest Act as basically it does not attract any provision of Forest law.