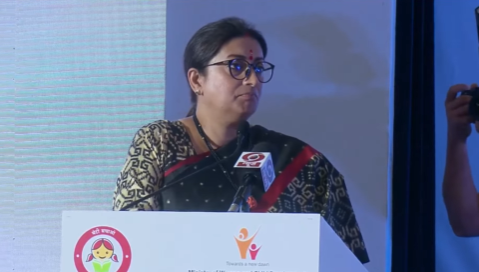 Union Women and Child Development Minister Smriti Irani today chaired the zonal meeting on June 12, to list the achievements of Central government, on completion of eight years in power.

She further said that UNICEF has validated the work of the Government of India. The work is a great blessing as a society. The word ‘achievement’ has a message that, when it comes to emancipation of women and children, men are equal partners . When we talk about child rights, it is not only the girl child, but also we talk about the rights of the male child.

The Union Minister further said that the aim of the government is to deliver justice and help to the needy. Today, one crore ninety lakh women are deployed in community services, which is the largest number anywhere in the world; around two crore eighty lakh women in the country are novel digital literates due to the efforts of min of women and child development, 14 lakh women representatives in Panchayats and 9 lakh ASHA Workers are working, 70% beneficiaries of ‘PM Mudra Yojana’ are women, is a great success story.

Smt. Irani praised the Government of Goa for implementing the ‘My Life-My Pad’ Scheme. The sanitary pads for the women beneficiaries are distributed through the self-help groups.

Rane said the request had been placed before Union Minister for Women and Child Development Smriti Irani who was here to attend the Zonal Meeting on eight years of achievements of the government.

Rane said there are 1,262 Aganwadis in the state and the demand has been for having 60 more Aganwadis.