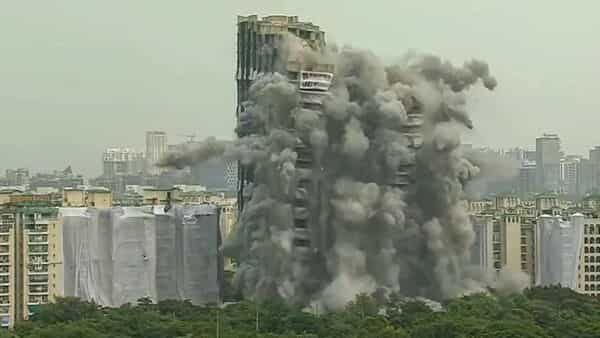 NOIDA: Nine years after a residents’ association went to court over the illegally built Supertech twin towers, a series of controlled explosions reduced the 100-metre tall structures to a huge pile of rubble — watched by thousands from surrounding rooftops and lakhs on live television. Apex (32 storeys) and Ceyane (29 storeys) were gone in 12 seconds on Sunday, in a carefully choreographed and meticulously executed demolition, the biggest such exercise in the country so far.

“It felt like structures of corruption were coming down,” said Purshotam Mishra, who had waited two hours for the spectacle to begin. The Supreme Court ordered the demolition a year back, saying there had been collusion between the builders and Noida Authority officials who let Supertech Ltd construct in the area where no buildings were to come up according to the original plans.

The builders paid for the demolition, which cost about Rs 20 crore. According to the company, their overall loss is around Rs 500 crore. That includes land, construction and interest costs. Many people travelled to Noida hours ahead of what could be a once-in-a-lifetime sight, as 3,700 kilos of explosives bored into the pillars and walls of the two residential buildings went off in quick succession.

WHERE WERE THE SUPERTECH TWIN TOWERS LOCATED?

The twin 40-storey towers (Apex and Ceyane) were located in Sector 93A of Noida, near the Noida-Greater Noida Expressway. There were over 900 flats in these two towers, which were part of Supertech’s Emerald Court project in Noida, Uttar Pradesh. Both towers together covered an area of around 7.5 lakh square feet.

WHAT WAS THE CONTROVERSY?

In 2005, Noida authorities had sanctioned building plans for 14 towers with nine floors each. However, in a revision, the new design had twin towers with 40 floors each. Also, the area where the towers were built, was to be made into a garden as per the original plan.

HOW DID THE LEGAL PROCESS BEGIN?

With the builders turning a deaf ear to the pleas of homebuyers, the Emerald Court Residents Welfare Association moved the Allahabad High Court alleging that the construction was illegal. In its 2014 and 2021 judgments, SC upheld that it was an illegal structure that violated fire safety norms, building codes and minimum distance requirements. It also said the new building plan which constructed the two towers Apex and Ceyane by removing the garden area shown to homebuyers in the brochure was done without the consent of the flat owners.

WHAT WAS THE VERDICT OF THE SUPREME COURT?

The two-judge bench of Justice DY Chandrachud and MR Shah noted: “The record of this case is replete with instances which highlight the collusion between the officers of NOIDA with the appellant and its management. The case has revealed a nefarious complicity of the planning authority in the violation by the developer of the provisions of law.”

It added that the sanctioned plan for Twin Towers breached the NBR 2006, NBR 2010, NBC 2005, UP 1975 Act and the UP Apartments Act 2010. “It becomes its (court’s) duty to take stock of the violations committed by the appellant in collusion with NOIDA,” the court said.

The bench in its August 31, 2021 order had also noted that Supertech had raised false pleas and attempted to mislead the top court, while the officials of NOIDA have not acted bona fide in the discharge of their duties.

WHAT DID THE BUILDERS SAY?

Supertech Ltd chairman RK Arora said the total built-up area in the two towers was around 8 lakh square feet and construction was carried out as per the building plan approved by the Noida development authority.

On the demolition, Arora told news agency PTI: “Our overall loss is around Rs 500 crore, taking into account the amount we have spent on land and construction cost, the charges paid to authorities for various approvals, interest paid to banks over the years and the 12 per cent interest paid back to buyers of these two towers, among other costs.”

He also rubbished reports that the episode would impact the company’s other projects. In a statement, the company said: “We have completed and given delivery of more than 70,000 units to homebuyers and are committed to give delivery to remaining homebuyers as per schedule time frame. We assure all our home buyers that the order of Supreme Court will not affect any other ongoing project and all other projects will continue,” it added.

WHO WAS IN-CHARGE OF THE DEMOLITION?

Mumbai-based Edifice Engineering and their South African partner firm Jet Demolitions carried out the demolition of the Supertech Twin towers. Indian blaster Chetan Dutta pressed the final button for the blast at 2.30pm on August 28.

HOW WERE THE TOWERS BROUGHT DOWN?

A technique called waterfall implosion was used to raze the illegal structure. The implosion technique is used in urban settings, where engineers tactfully remove the supporting structures of the building that brings it down upon itself, causing the debris to fall like a waterfall. This requires controlled use of detonators and explosives, which are drilled into the building that supports the structure.

Talking of other methods, the diamond cutter technique would have taken two years to raze the twin towers and the cost would have been five times of the implosion method, Edifice partner Utkarsh Mehta told PTI. The robotic technique would have caused a lot of noise and taken 1.5-2 years, affecting residents of nearby Emerald Court and ATS Village.

WHAT ARRANGEMENTS WERE MADE?

Over 5,000 residents of Emerald Court and ATS Village — the two closest societies to the twin towers – were evacuated. Around 2,700 vehicles belonging to them were also removed from the premises. An exclusion zone was created at a radius of up to 500 metres around the twin towers where no human or animal was allowed, except for a team of Indian and foreign blasters engaged in the demolition.

The Noida-Greater Noida Expressway was shut for vehicular movement from 2.15 pm to 2.45 pm on August 28.

Around 50 beds were reserved for residents in case they fall sick, at the Felix Hospital in Sector 137, including beds for 12 bedridden residents of Emerald Court, ET Now reported.

Moreover, the Noida Police also issued an order banning the use of drones in city skies from August 26 till August 31 citing security reasons in view of the demolition of Supertech’s illegal towers.

HOW MUCH DEBRIS WAS CREATED? HOW WILL IT BE MANAGED?

The demolition of the Apex (32 storey) and Ceyane (29 storey) has reportedly left behind approximately 35,000 cubic metres of debris.

Around 1,200 to 1,300 truck-loads of debris would have to be moved out from the site. The Noida Authority has a construction and demolition waste management plant in Sector 80, with a capacity of 300 tonnes per day. However, considering the rubble that would be moved out, it is still not clear whether it would be processed there, news agency PTI reported.

According to officials, all the debris will not go to waste. Approximately 4,000 tonnes of iron and steel is likely to be yielded out of the demolition, which the Edifice plans to use to recover a part of the demolition cost.

The dust generated from the demolition of the Supertech twin towers in Noida on Sunday did not make its way across the border to Delhi, all thanks to favourable wind direction. Experts said the north and northwesterly winds blew the dust towards Greater Noida and further into Uttar Pradesh instead of towards the national capital, according to an article published by Hindustan Times.

The demolition also did not quite affect the air quality in Noida itself, with experts saying it was “within acceptable limits”. The Noida Authority was constantly monitoring the air quality after the demolition while agencies present at the site used anti-smog guns to battle the dust generated from the blasts. According to reports, the dust has settled in the area and safety parameters have been reduced to barely a few feet from the rubble.

HAS THIS HAPPENED BEFORE IN INDIA?

In Kerala’s Kochi, the waterfall implosion technique was used to blow up four high-rise buildings in 2020. Edifice Engineering used the controlled explosion method to bring down the buildings in Maradu after the Supreme Court ruled that the construction of the flats violated coastal regulations.

On January 11, 2020, at around 11.19 am, a series of small explosions went off at H2O flats. The 19-storey building collapsed. Alpha Serine broke double flats within a quarter of an hour.

On the second day, Jane Coral Cove, which was the big flat to break, was the first to fall on January 12 at 11.01 am. The 17-storey, 128-apartment Coral Cove fell in six seconds. Even though it was on the banks of the lake, the explosion was done with precision without even a handful of garbage falling into the water. It cost the government Rs 66 crore to demolish these four buildings.

The Supreme Court on August 31 last year had ordered the demolition of the Noida Supertech twin towers for violation of building norms in collusion with district officials, holding that illegal construction has to be dealt with strictly to ensure compliance with the rule of law.

(With inputs from agencies)