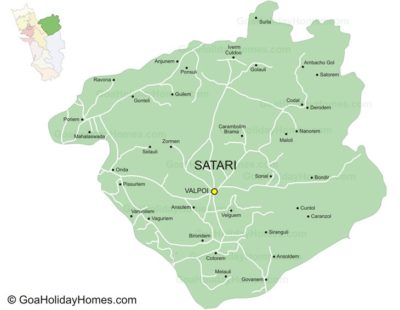 Goemkarponn desk
VALPOI: With the Assembly election just a few months away, the political activities in the tiny State of Goa has gained momentum as many political parties from other States have also entered Goa.
The Aam Aadmi Party, Shiv Sena and Trinamool Congress entered Goa; there is a possibility of some changes in Goa’s political arena.
As such Sattari taluka is no different. Changes in the politics of Sattari taluka also cannot be ruled out.
The simmering resentment against the government has started to show up, and the aspiring candidates’ have begun influencing voters.
It wouldn’t be surprising if Congress and the BJP workers denied tickets may join the Trinamool Congress or the Aam Aadmi Party.
Sattari taluka has two Assembly constituencies – Valpoi and Poriesm.
Valpoi constituency is currently led by BJP Health Minister Vishwajit Rane while his father Pratapsing Rane rules the Poriem constituency.
If senior Rane retires due to old age, many aspiring candidates are expected to throw their towel in the ring.
Vishwajit Rane, however, claims irrespective of his father contesting or not, the constituency is entirely safe.
Another question is if BJP fields Vishajit from Valpoi, who will be the Congress candidate?
Ranjit Rane, Dashrath Manjrekar, Roshan Desai, who are currently working for the Congress party, have started their efforts for the candidature.
The Congres is undecided on the candidates, which have led to rebellion in the party’s block.
The question now arises is whether some third party will benefit from this infighting.
Meanwhile, Satyavijay Naik, who contested from Valpoi on BJP symbol in two Assembly elections, has been completely underground for the last four years.
Now, however, he is focusing on gradually reaching out to voters. This has created curiosity amongst voters as to which party he will contest the elections.
If Vishwajit Rane is nominated by BJP, will Satyavijay Naik work for Vishwajit Rane?
Meanwhile, according to the information received, it is understood that Satyavijay Naik wants to contest assembly elections under any circumstances.
It is learnt that he is in touch with some political parties. If that happens, there is no denying the possibility that the BJP will be hit to some extent here, as even today, Satyavijaya has some connection in the constituency.
On the other hand, Trinamool Congress has started trying to infiltrate the constituencies.
The party has met several leaders in Valpoi too.
On behalf of the Aam Aadmi Party, Vishwesh Parob has made a good contribution. However, the young and vibrant Shubham Shivolkar, of teh IIT Goa fame, also intends to contest Valpoi.
The tussle is between Vishwesh Porob and Shivolkar for the AAP nomination. However, there is another twist to the tale as Mahadev Naik, a general worker of the party and an honest party member for the last several years, has also sought a party ticket.
The role of the Maharashtrawadi Gomantak Party is still not clear from this constituency. There is still ambiguity whether the MGP will go all alone or tie-up with the BJP.
IN Poriem, there is no clarity whether teh senior Rane will contest or not.
However, if he contests, it would be a major setback for BJP in Poriem.
Meanwhile, there is a question mark over the role of Vishwajeet Krishnarao Rane, who has contested the Assembly elections twice on behalf of the BJP.
He has lost connect with people in the last four years.
Gurudas Gaonkar, a young activist from this area, has joined Shiv Sena and announced that he will contest from this constituency on behalf of the party.
He says that at the moment, he is trying to communicate with the voters through different channels.

Is this Dr Sawant’s Swayampurna Goa?

Directs the panchayat to renew the trade license for operating a general store on the usual terms subject to further orders in this petition. Such ... Read More

NEWER POSTShah: Will win Goa WITH FULL MAJORITY
OLDER POSTHEIGHT OF LOOT? Govt land sold to Govt itself in Sanguem