After joining TMC, Reginaldo says Congress has no future in Goa 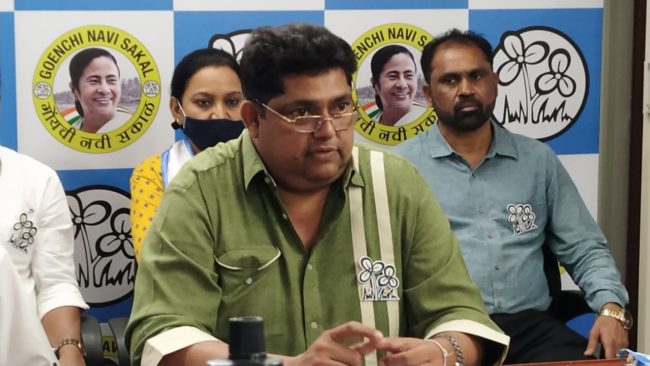 Says it has failed the State in most grieving times: Reginaldo
Goemkarponn desk
PANAJI: Former Congress MLA and present TMC Leader Alex Reginaldo Lourenco today claimed that the Congress Party has no future in the State for the coming assembly elections. He also said that Congress has failed Goa in most grieving times.
Addressing the media, Reginaldo said that the ones who have resorted to name-calling and humiliating my firm political step and even attacked my identity are the same people who constrained my attempts to take decisive steps as the Working President of their regime.
He said that being elected and not being able to work is the worst thing for any leader, and for him, that was the tipping point.
“There were a lot of issues in connection with the people of Goa. So many things needed to be addressed, and Congress failed to do it. I waited, but there was no move from Congress. So, I decided to move to a party (Trinamool) that is ready to take up the issues,” Lourenco said.
He further said that politics for him had only been a medium to take the steps that resonated with the needs and aspirations of the people, and despite a proven track record, the people’s voices had been suppressed.
Aleixo then stated that the decision he had taken had the commitment to the people of Curtorim and Goa at the very center of it. He assured everyone that they were not alone in fighting the undemocratic and compromised politicians anymore.
“The leaders and the political force I’ve now joined hands with have the right intent & the guts to defeat the dispensation that is tearing apart the ethics of democracy, solidarity and inclusion in Goa”, asserted Lourenco.
Aleixo Reginaldo Lourenco, a two-term MLA from Curtorim Assembly seat, was recently projected as the Goa Pradesh Congress Committee’s working president.
“I can vouch that this is a good decision that I took for my people; every time we took up issues in the assembly, nothing happened, Congress never paid attention to anything that mattered to the common man”, he added.
He also claimed that too many tricks have been played to malign my image.
“I’ve never been involved in any corruption case; I want to tell my people that there will be no compromise on any issue nor any interest where the state is involved,” Reginald said.

NO ALLIANCE YET: RAO – Alliance decision with GFP only after elections are announced

Congress GOOGLY?? "No decision yet on alliance with the Goa Forward. The party has extended support to Congress. The final decision on alliance only after ... Read More