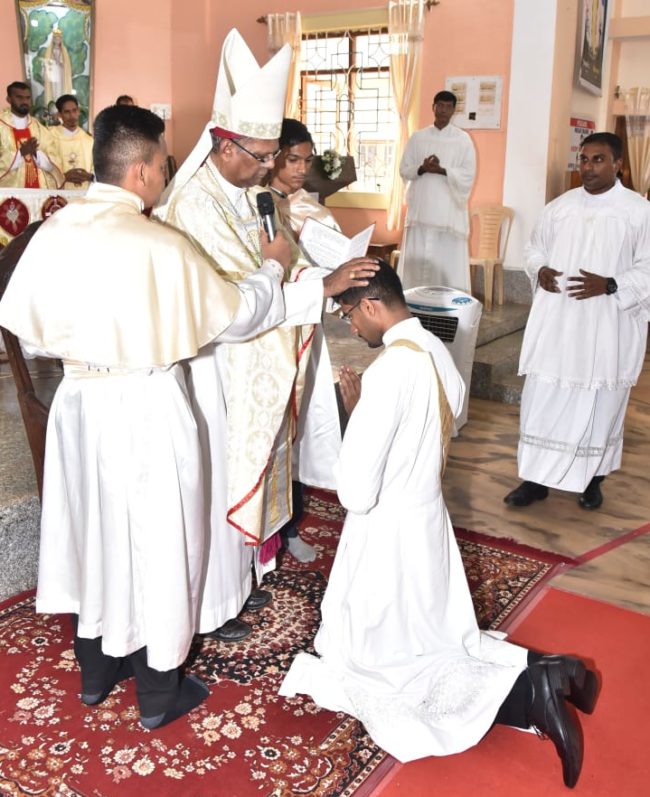 Goemkarponn desk
CANACONA – Calling on the parishioners to help increase the number of Priests, Sindhudurg Bishop Rev Alwyn Barretto sought gifts of priests to his diocese, which was short of Priests.
Bishop of Sindhudurg Bishop Rev Alwyn Barretto interacted with the Parishioners after conferring the priesthood Ordination to Deacon Neville Fernandes of Agonda.
Agonda village gave its second Priest to the Society of Pilar after a gap of two and half decades as Deacon Neville Fernandes is ordained as Sfx Priest on Sunday.
‘Love one another as I have loved You’ is the theme taken by the newly ordained Priest Neville Fernandes.
In a glittering and one of a kind Ordination Ceremony attended by around 60 Priests at Agonda village, Bishop of Sindhudurg Rev Alwyn Barretto administered the priestly ordination to Deacon Neville Fernandes.
Fr. Neville Fernandes is the youngest son of Cipriano and Efante Fernandes of Agonda; amongst the other two sister-brother siblings, he is the prodigy of St. Anne’s Institute before he joined Pilar Seminary 14 years ago, completed his higher education and Theological studies in Pilar Seminary and Pune.
Newly ordained priest Fernandes is the nephew of Anjuna Church Parish Priest Fr Santiago Fernandes and Nun Petolina Fernandes.
Society of Pillar Father’s Vicar-General Fr. Nazareth Fernandes representing society of Pillar Superior Fr Sebastiao Mascarenhas, Rector of Seminary Fr. Peter Melo Fernandes, Delhi Provincial Fr. John Marcus, Anjuna Parish Priest Fr Santiago Fernandes, besides Agonda Parish Priest Fr Patrick Luis, Assistant Parish Priest Fr Darrel Fernandes were amongst the 60 Priests mostly SFX father’s were present at the ordination ceremony held at St. Anne’s Church, Agonda.
In an interaction with the faithful, Rev Alwyn Barretto said ‘The Pillar Society was formed in Agonda in 1887 by Fr. Bento Martins, later shifted to Pilar has helped to spread the word of God through missionary priests in several parts of the country and also some other countries as well. We are in short of missionary priests to spread the word of God; in Sindhudurg Diocese we have only about 36 priests; if anyone wants to gift me, please gift me a Priest to carry on the missionary works in my diocese.’

Goa Teacher Eligibility Test to be held on Nov 21; 1st in Goa

Journalists must point out mistakes, Isidore

Goemakarponn news CALANGUTE: In a bid to reduce the load on health centres and the Village panchayat of Calangute will begin testing centres in the ... Read More