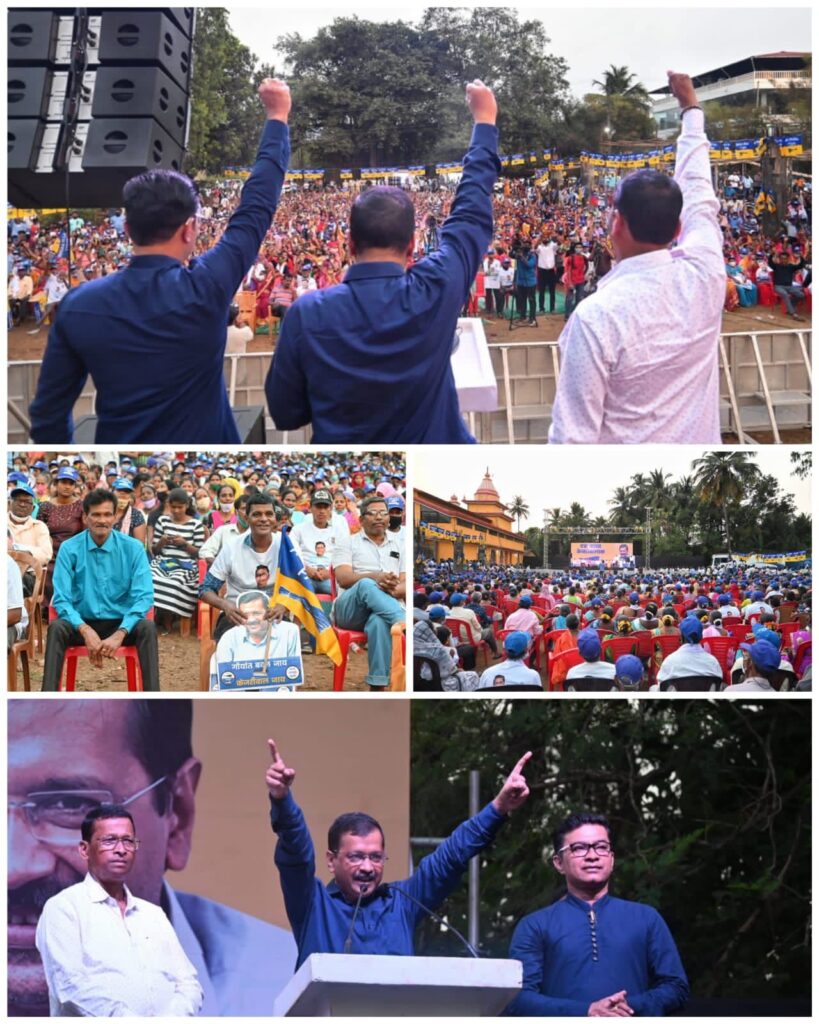 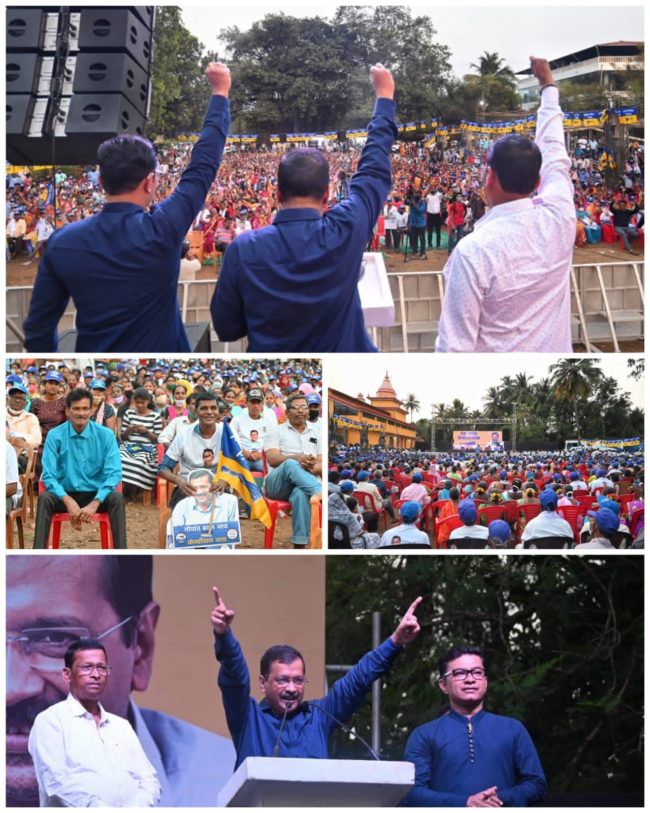 The AAP National Convenor and Delhi Chief Minister Shri Arvind Kejriwal, who arrived in Goa on Thursday afternoon to drum up support for party candidates, assured Goans that money that goes into the pockets of ministers currently would be directed into the service of the people if the party wins.

As part of his two-day visit, Shri Kejriwal addressed massive Jansabhas in Mayem, Poriem, and St. Cruz on Thursday where the party received a tremendous response from the people.

24,000 crore debt on Goa but not a single penny spent to built schools-hospitals: Arvind Kejriwal

Shri Kejriwal asserted that Goa owes 24 thousand crores. Yet in the last 25-30 years, there have been no new educational or healthcare facilities, nor have there been quality roads built. Where does the money go then? It goes to the minister’s pockets.

Goa will soon welcome the most honest and corruption free government in form of AAP: Arvind Kejriwal

Shri Kejriwal assured a “corruption-free and honest” government in Goa, if the AAP is voted to power. Kejriwal said that the guarantee was made based on the track record of the AAP’s Delhi government, where its own minister was sacked on allegations of seeking a bribe from a shopkeeper.

Like Delhi, AAP Government will come to people’s doorsteps, no need to come to offices: Arvind Kejriwal

He said, “Ministers or MLAs won’t be spared from punishment, if they are found demanding bribes. We will also stop petty level corruption by introducing doorstep delivery of services. In Delhi, government officers visit an applicant’s residence to collect the documents, and a similar system will be introduced in Goa. Right from your panchayat work to the assistance from the chief minister, everything will be at your doorstep”.

Will resume mining despite all odds, my guarantee to Goa: Arvind Kejriwal

Regarding the mining sector in the state, he said there are a lot of vested interests. “It is not possible that mining cannot be resumed. The current government does not want it to resume it. Our intention is pious. Our government will ensure that mining will resume within six months, and till then, every dependent family would be provided a monthly allowance of Rs 5,000″.

Will take just 6 months to give land rights denied for decades to Goans: Arvind Kejriwal

Shri Kejriwal also said that within six months of coming to power, the AAP government will provide land rights to those who have not received the same for decades. Despite Goa being a power-surplus state, there are frequent power-cuts in the coastal state. Kejriwal said 35 lakh families in Delhi get “zero electricity bill” under the AAP government.

No one but AAP can generate large scale employment: Arvind Kejriwal

Further he said, “Our party has provided employment to 10 lakh youth in Delhi. If you want employment, vote for AAP since we are the only party that can create jobs. Until one finds employment, we will provide a monthly unemployment allowance of Rs. 3000”.

In a similar vein to New Delhi, he promised free pilgrimage, free medical services, and better road and education infrastructure if AAP voted to power. He said, “Once we form the government, every female over the age of 18 will receive a monthly allowance of Rs.1000 and the Griha Aadhar allowance will be increased from 1500 to 2500”.

Time to end the regime of politicians who are intoxicated by power: Amit Palekar

AAP CM face and St. Cruz candidate Advocate Amit Palekar said, “Tony Fernandes, MLA from St Cruz who jumped from the Congress to BJP claims he has done development work of 90 crores. I am curious as to what kind of development he has done since the area still lacks basic amenities”.

He further stated that a strong anti-incumbency exists against the BJP government in St. Cruz and that the BJP had struck a secret deal with the Congress candidate Rudolph Fernandes to combat it. As soon as Fernandes wins the St. Cruz seat under the banner of the Congress, he will join the BJP the next day and help them form the government”.

Palekar said, “St. Cruz has seen no development for the past 25 years. The villager’s long-pending demand for a market at St.Cruz village has not been met. After being one of the most popular tourist destinations, St. Cruz does not have adequate transport connectivity. Major bus stops are in disarray. Even the basic amenities, such as uninterrupted water and power supply, are lacking at St. Cruz.
It’s time we end the regime of politicians who are “High on Power”.

Goa may be free but not liberated from corrupt clutches: Rajesh Kalangutkar

AAP Mayem candidate Rajesh Kalangutkar said, “While Goa was liberated in 1961, Mayem has not yet been liberated. Mayem constituency is facing three major issues. These include rising unemployment rates, lack of infrastructure, and land ownership”. Adding he said, ” ‘Arvind’ means lotus. We have another lotus in Mayem. The people need to decide which lotus they want to support. A lotus that has been corrupt for a long time or a lotus that will provide honest governance”.

AAP Poriem candidate Vishwajeet K Rane said, “Poriem MLA Pratapsingh Rane has been MLA for 50 years and was chief minister for more than 17 years. Despite this, he has failed to give the people of Poriem basic necessities. The Poriem Constituency continues to be plagued by the closure of mining activities”. He stated that Poriem is suffering because of a feudal spat inside a family due to which it has been underdeveloped for decades. It’s high time that people change the feudal system established by BJP and Congress.

Adding he said, “With the election looming, however, both he and his son, a MLA from Valpoi, have promised jobs. Are jobs created three months before the election? And that too they provide Multi-tasking jobs and security jobs. Shri Kejriwal is a man of his words. He was elected by the people of Delhi for the kind of developmental work he did in his tenure as CM. If we want to see change in the Constituency, we need to support AAP”.