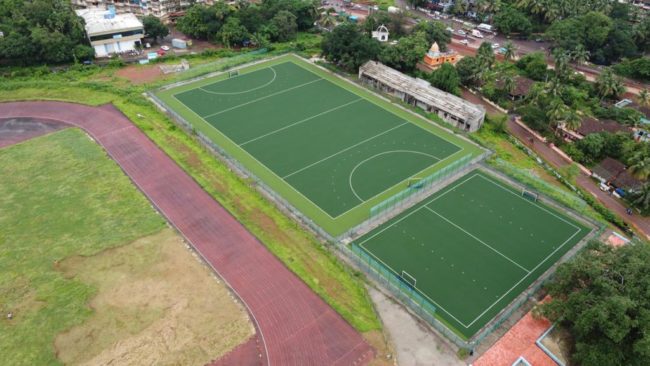 Completed last year, the Peddem astroturf is yet to be inaugurated
Goa last produced a Indian player 40 years ago, say experts
Despite immense talent, players lag behind due to lack of infra
SURAJ NANDREKAR
PEDDEM (Mapusa): The Bronze medal victory after 41 years in the Tokyo Olympics has given new hope for the nation in hockey. Not just India, Goa, in particular, has cheered the Men’s and Women’s teams alike, which was proved by the congratulatory messages and tweets on social media.
Yes, hockey is a game Goans love after football.
Several Goans have represented the country in yesteryear, but since 1974-75, Goa could not produce any player who represented the country as the game has changed and the State does not have facilities and infrastructure, experts say.
Sadly, the only astroturf that has been laid is awaiting opening. It seems that the government or the Sports Authority of Goa is awaiting an “auspicious occasion” or a Mahurat for the inauguration as the elections are around the corner.
Information reveals that the contractor delayed the work as the astroturf had to be relaid due to a wrinkled surface.
But, sources reveal, the turf was ready last year, but the SAG is dilly-dallying in the opening.
When Goemkarponn spoke to the Sports Authority of Goa Executive Director Vasant Mohan Prabhudesai, he replied, “do you see any sports during the COVID pandemic.”
“The turf is ready, but there is no sports played. There are government norms not to gather more than four people. How can hockey be played with 22 players on the ground?” he asked.
He said once things normalise, they will inaugurate the turf.
Prabhudesai added, “we are also waiting for the dressing rooms to be completed. It won’t be right to open ground without dressing rooms.”

Goan players lack exposure…
Prabhudesai said that the Goan players need exposure, which would come with the organisation of more tournaments.
“Merely playing 20 matches in five years will not help. Department of Sports is organising tournaments, but that’s it, what after that? What is the Association doing?” he asked.

Lack of infrastructure…
Hockey coach Alexandre Remedious questioned how a Goan player can qualify for the National team without the facilities and infrastructure? All are make-shift grounds.
“The most significant difference is the grass and turf. How can one play from grass to turf directly? Yes, our boys are improving but lack facilities.
The astroturf at Pedem grounds is ready but awaiting an auspicious occasion for the inauguration,” he said.
He said Goa cannot produce an Olympian in just one year; it is 8-year planning.
“One of Goa’s players Pandurang Sakhalkar, from Guirim, was is in India camp. The same camp boys have now played in the Olympics team.
The national coach Harinder Singh had told me he is a great talent but lacks the practice on turf,” Remedious said.
He said that the boys have to start training at 10-12 years of age.
“We need two astroturf, one in North and one in South, but the finances are involved for which the government has to chip in. The Orissa government has invested around 100 cr in women’s teams. Do we have that kind of attitude?” he asked.
He also said that there is no professionalism in Association.

Association not doing enough…
Former National Hockey player S.J. Redento de Sousa, the Dy Director Sports, also blamed the Association for not doing enough.
“There is no competition at all in Goa. Whatever the players play is at the school level in Nehru Hockey at the junior and sub-junior level. The Association seems to be nowhere,” he said.
Junior teams are doing fine as there are tournaments in schools, but there is nothing for seniors.
“Also, there are no turfs to practice. The turf at Peddem are yet to be handed over to the SAG,” he says.
He said the Association and the government have to concentrate on the grassroots level.
“We cannot change the senior players much, but the juniors can be groomed. The Association must step in and conduct at least 4-5 tournaments,” he said.
He added, “The last Goans I know played somewhere in 1974-75 when players like Ana Figueira, Loretta D’Souza represented the country. “