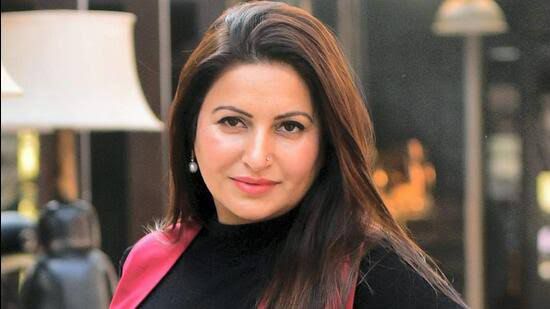 DAHISAR: The family of BJP leader and actor Sonali Phogat, who was allegedly murdered in Goa, have raised fresh allegations that her personal assistant and his friend – who were on Friday arrested in connection with her death – possibly murdered her to grab her property. The actress had assets worth approximately Rs 2.74 crore, according to her 2019 poll affidavit.
Phogat’s family members, including brother Rinku Dhaka, sister Ramen Phogat and brother-in-law Aman Punia, have alleged that she was murdered by her personal assistant Sudhir Sangvan and his aide Sukhwinder Singh Wasi with a motive to grab her property. The family also said that Sangvan was possibly just a “front man” and there could be a larger political conspiracy behind Phogat’s death.
In his written complaint to the police, Rinku said Phogat had been an actor in films for 15 years and was an active BJP worker. The complaint added that Sangvan, a resident of Rohtak, and Singh, a resident of Bhiwani, met her during the poll campaign. Sangwan started working as Phogat’s assistant and she trusted him and Singh, it said.
“In 2021, a theft took place at her residence… After that, Sudhir (Sangvan) terminated her cook’s services and started taking care of her meals himself. About three months ago, Sonali called and told me that Sudhir had served her some sweet-rice pudding (kheer) after eating which she started shivering and her limbs stopped working. I questioned Sudhir, but he gave me an evasive reply,” Rinku said in his complaint.
He further alleged that as her personal assistant, Sangvan used to take care of Phogat’s finances and paperwork. “She used to blindly trust him and sign any paper that he gave her. On August 22, 2022 evening, she called her brother-in-law Aman Punia and told him that Sudhir had given her some food mixed with something. She told him that she was feeling uneasy after eating that meal. She also told Aman that the theft that took place at her residence in 2021 was committed by Sudhir and his friend. She added that she would come to Hisar and inform the Hisar police about it,” Rinku’s complaint said.
“Sonali also told Aman that both her mobile phones, property documents, ATM cards and all the keys to her home were in Sudhir’s possession. She also told Aman that both Sudhir and Sukhwinder can harm her. While she was talking, the phone got disconnected,” Rinku said.
Talking to The Indian Express, Rinku added, “We suspect that Sudhir and his friend Sukhwinder both murdered Sonali with an intention to grab her property. When we reached Goa, we asked him about her articles including her wallet, ATM cards etc. He told us that he and Sonali came to Delhi in a car that was parked in a flat in Gurgaon. We asked him about the flat’s keys to which he said that the keys were lying in the car that was parked there. When we asked him about the car’s key, he refused to give it and went away”.
“That Gurgaon flat was bought by Sonali a few months ago. We suspect that Sudhir wants to grab that flat, too”, Rinku said, adding that it was not clear if the flat was in Phogat’s or Sangvan’s name.
Sangvan is a native of a village in Gohana, Sonipat but his family is settled in Rohtak city. His father Satbir told The Indian Express that he “has faith in the ongoing investigation”.
The Indian Express also analysed Phogat’s assets that she had declared in her election affidavit while contesting the 2019 Haryana Assembly polls. According to the affidavit, she had declared her total assets (moveable and immoveable) to be worth Rs 2,74,11,640. In terms of immovable assets, she had declared that she inherited a 6.25 acre agricultural land and its market value was Rs 2.15 crore. In terms of residential buildings, she had declared ownership of a flat in Sector 52 at Noida which was purchased for Rs 31 lakh, and a 117.33 square yard plot in Hisar’s Gangwa village that was purchased by her at a cost of Rs 2.5 lakh. She had “nil” financial liabilities, and had no loans in her name.
She had declared Rs 12.5 lakh (cash in hand) and Rs 5,11,640 as deposits in three bank accounts. She had also declared gold worth Rs 19.25 lakh and given the estimated value of her moveable assets at Rs 36.86 lakh.
Phogat contested from Adampur constituency in Hisar, but lost to then Congress nominee Kuldeep Bishnoi. Recently, Bishnoi had quit from the Congress and resigned from the Haryana Vidhan Sabha, necessitating a bypoll in the constituency. Bishnoi has now joined the BJP and is eyeing the Adampur ticket for himself or son Bhavya Bishnoi.