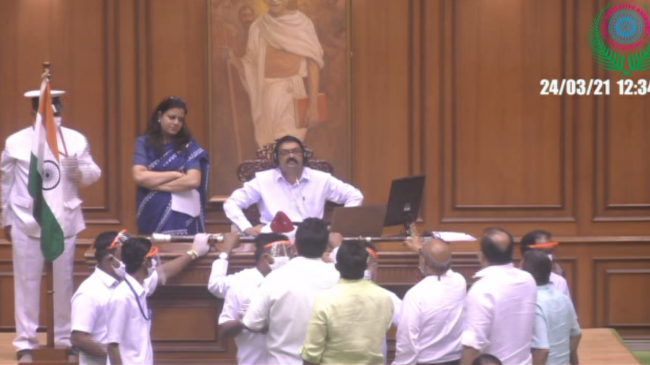 PORVORIM: Stormy scenes were witnessed on the floor of the house on the first day of the Budget session of the state legislative assembly over Railway Double tracking issue.

Cortalim MLA Alina Saldanha had raised the question whether the SWR officials or the officials of any Government Department demarcated on ground, the area or are markings done at the site indicating the land to be acquired for the said project under this notification however the concerned minister failed to give a concrete answer which led to ruckus in the house.

Demanding half-an-hour discussion on the issue, opposition walked into the well of the house forcing the speaker to adjourn the session for 15 minutes.

Saldanha questioned whether the Government was aware that Office of the Land Acquisition Officer and the Dy. Collector/SDO., Marmugao Taluka and Vasco Da Gama, has published a notice on local dailies dated 19.06.2020, informing the affected land owners about the South Western Railway’s (SWR) intention to acquire land for the special project namely doubling of Hospet-Hubballi Tinaighat-Vasco Routes invoking Railway Act 1989.

Goa Forward MLA Vijai Sardesai attacked the government over the issue stating that Chief Minister Dr Pramod Sawant is acting like a puppet of the central BJP governemnt. For months now, Alina has led protests against the doubling of railway tracks along the South Western railway route, which passes through her constituency of Cortalim in South Goa, claiming old heritage houses would be demolished if the double-tracking comes through and that it would also generate pollution.