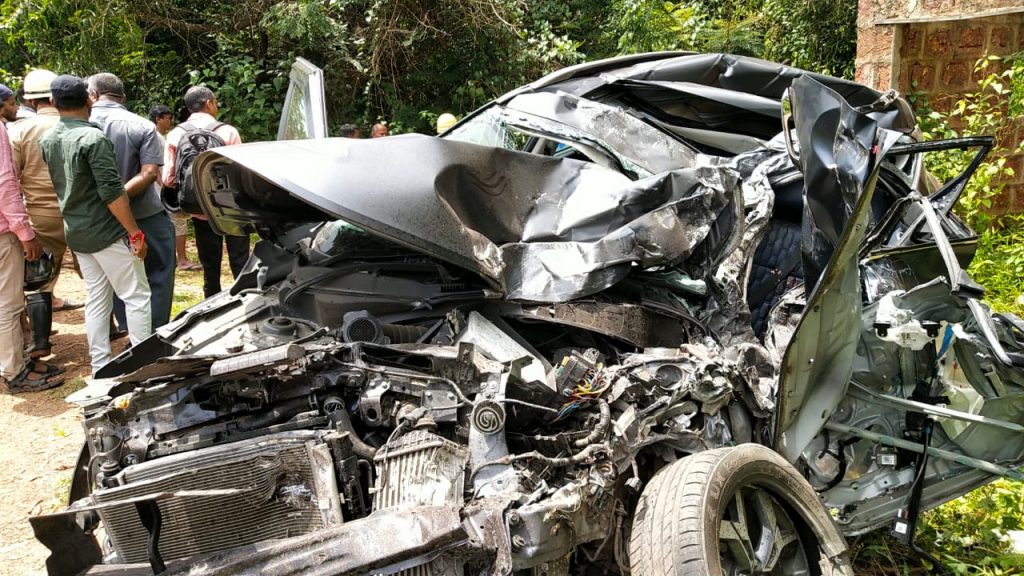 Goemkarponn desk
PANAJI: Two innocent lives of a mother and 45-days old infant were lost a couple of days ago at Torshem, and shockingly the authorities refuse to blame the ongoing four-0lanning works by M Venkat Rao or the Public Works Department for the deadly accident.
The Report by the Goa Police Traffic Police into Fatal Accident that occurred at Torshem, Pernem on 27/09/2022, squarely blames the truck driver for accident.
“With reference to the above, it is submitted that on 27/09/2022 at about 12.00 Hrs a Fatal Accident occurred near Government Primary School, Torshem. The same
has been registered at Mopa Police Station vide Cr. No. 04/2022 u/s 279, 337, 338. 304-A IPC,”: the report says.
“Upon inquiry with the Investigating Officer, it has been informed that on the relevant date and time, Truck driver bearing No. KI-10-A7-8096 namely Pravin Kumar P.K, aged 52 yrs r/o Kerala, while proceeding from Pernem to Patradevi side drove his vehicle in a rash and negligent manner without taking proper care and caution and when reached near Govt. Primary School, Torsem gave dash to the oncoming vehicle KIA Seltos Car bearing No. MH-12-TS-8780, which was proceeding from Patradevi to Dhargal side,” says the report of S.M. Prabhudessai,
Superintendent of Police, Traffic.
The report further states that due to the impact, two occupants of the Car, namely Mrs Apurva w/o.
Piyush Gundecha age- 32 yrs and Mast. Aayan S/o Piyush Gundecha age, aged 01 yrs, expired on the spot. Whereas the driver of the said Car, namely Mr Piyush Gundecha, age-32yrs and two other occupants, namely Miss. Myra Gundecha age-04yrs and Miss. Nikita (full name and address not known), age 20yrs, sustained
grievous injuries.

The inspection report…
The said accident spot was visited by DYSP Traffic (North) and PI TC Pernem on 29/09/2022.
During inspection of the said accident spot, it has
been revealed that the said accident spot is on NH-66 near Government Primary School, Torshem. Presently, construction of the new NH-66 from Torshem towards
Poroskade is in progress.
“At Torshem, construction of the new NH-66 is found to be temporary on hold, and a cautionary traffic sign of “Take Diversion” was placed for the traffic coming from Patradevi to Pernem. The stretch of NH-66 from Patradevi to Torsem upto Government Primary
School is a cemented road having divided two-lane carriageway without potholes. The
said divided two-lane carriageway ends just before Government Primary School. There is a “Take Diversion” Signboard placed at the end of the divided two-lane
carriageway. Thereafter further, the said road becomes two-lane carriageway without Central Divider, and the same is a tarred road without potholes. However, at the
merger point where the “Take Diversion” Signboard is placed, the road is slightly\ uneven with a small pothole.
Further, there is a small stretch of road behind the “Take Diversion” signboard, which is under construction, and the same is non-motorable with mud dumped on it.
After the occurrence of the accident, the said mud was replaced with loose metal aggregate, the report says.
Further, it says, the Photographs of the said location are enclosed herewith. Point of Accident is marked as “A’ on Page 1. Likewise, the Photo of the Signboard with mud dumped behind it is marked as “B” on Page 1.