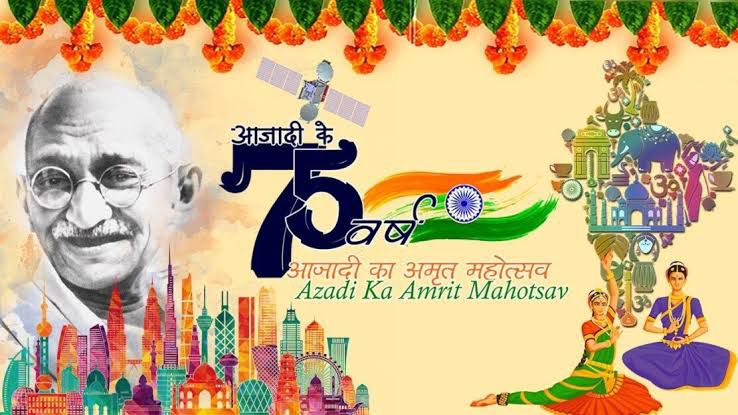 India achieved its Independence due to the selfless efforts of our hundreds and thousands of Satyagrahis who launched an all-out offensive against the tyrannical foreign rule, which lasted for around a century. In this Amrit Kaal, we remember their valour in no uncertain terms. 12th March 2021 saw the beginning of our journey of remembrance of our freedom struggle as a heroic gesture of the tremendous struggle launched by the mahatma on the banks of river Sabarmati in what we popularly refer to as the civil disobedience movement on 12th March 1930 with a batch of hundreds of Satyagrahis with the culmination of the yatra on 6th April 1930 breaking draconian salt law. The celebration was the 75 weeks prior to the grand celebration on 15th Aug 2022. During the past seventy-five weeks, the country has seen a great recall of the courage the valour of the brave hearts of mother India. The country has seen the tremendous heroic tales narrated in all the states and union territories, as well as our missions abroad. The country has been the territories as well as our missions abroad.
The country has been tremendous all-around progress in different spheres to be recognised together as one of the largest economies in the world. Being the world’s largest as well as the world’s youngest has also put in us the added responsibility of upholding the principle of Vasudaiv Kutumbakum to realise the good of greater numbers.
The mantra of Sarva Dharma Sambhav coupled with the Sabka Saath Sabka Vishwas Sabka Prayas given by our Honourable Prime Minister to herald a new age in India as we as launch our journey towards the centenary of our independence in 2047.
The present demographic dividends we possess make the world’s envy as we boast of a thriving middle class with a young population which gives us tremendous human resources which can be channelised in an optimum manner to realise our goals. The overall indices in various social sectors like literacy, health care, and infant mortality have seen tremendous changes leading to better living standards.
A lot of social service schemes and subsidies have been provided. Also, the vulnerable and economically weaker sections have been well catered to by providing the necessary impetus. The economy has been buoyant even in the Corona times leading to prosperity. On the economic front, Atmanirbhar Bharat has been launched to create equity and self-dependence.
The launch of the goods and services tax has resulted in a level playing field, and the concept of ease of doing business has resulted in several small enterprises coming up in a big way.
The start-up regime has helped our youth to be economically independent, and the set up of unicorns has resulted in a great leap forward. The defence sector has seen our soldiers and officers getting their due on account of the OROP Scheme.
Also, the defence preparedness of our country is far better. The growing clout wielded by India in the work arena through several multilateral groupings has enabled it to wield influence at global levels even in Corona times to supply vaccines to needs and also our neighbours to tide over their economic problems. The launch of the national education policy with a focus on skill development will result in doing away with the Archaic Foreign Education System of the yesteryears. The Sports and other entertainment sectors have made tremendous progress. As we celebrate the Mahotsav by unfurling the Tiranga in our homes, it is high time to take resolve to make the dream of New India come true in the next 25 years as we are on the threshold of having a new parliament complex with the desire to be a leader of nations in the world together also will be realised once the efforts of 1.3 billion people come together to realise the dream of our Bharat becoming a Vishwa Guru which it once some centuries back.
Wishing all our countrymen the greetings of this fantastic epoch-making event. Jai Hind. The celebrations would, however continue till 2023.
Kindly Publish this Article in your Esteemed Daily on the occasion of Independence Day.