BATTLE ROYALE: from Monserrate vs Utpal to Kamat vs Azgaonkar 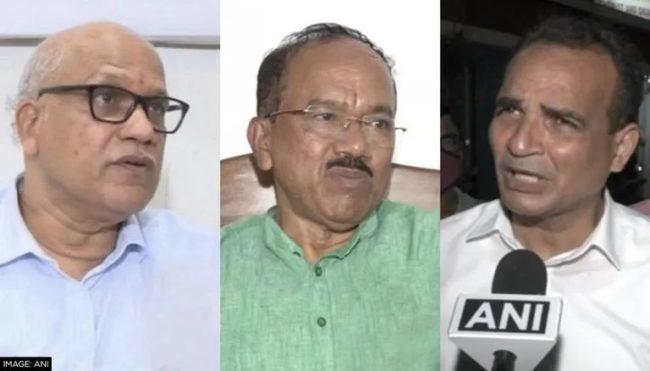 PANAJI: Touted as a battle between BJP, the Congress-Goa Forward Party alliance, the MGP-TMC tie-up and AAP, the Goa election is being conducted in a single phase on February 14. There are 301 candidates in the fray for the 40 constituencies going to the polls on Monday. In the 2017 Goa Assembly polls, BJP suffered a big blow in the absence of its stalwart leader Manohar Parrikar as it could win only 13 seats in contrast to Congress whose candidates won in 17 constituencies. But BJP formed the government with the support of 3 MGP MLAs, 3 GFP MLAs, two Independents and an NCP MLA under Parrikar’s leadership.
Here are the key contests:

Panaji: Atanasio Monserrate (BJP) vs Utpal Parrikar (Independent)
A BJP bastion, Panaji has become a battle of prestige for the party after ex-Goa CM Manohar Parrikar’s son Utpal Parrikar decided to contest as an Independent. After the untimely death of his father, Utpal Parrikar had made public his desire to contest the 2019 by-election in Panaji. However, BJP gave the ticket to Sidharth Kuncalienker and ended up losing to Congress for the first time since 1994.
Ironically, the winning Congress candidate Atanasio Monserrate switched allegiance to BJP along with 9 other party colleagues just a few months later. Rebuffing the JP Nadda-led party’s offer to contest from some other seat, Utpal Parrikar will now take on Monserrate who is contesting on a BJP ticket.

Margao: Digambar Kamat (Congress) vs Manohar Ajgaonkar (BJP)
Margao is set to witness a fascinating contest with BJP pitting Goa Deputy CM Manohar Ajgaonkar against Congress veteran Digambar Kamat. While the latter has held this seat since 1994, Ajgaonkar is the sitting MLA from Pernem. Perceived as a possible CM face, Kamat is the only current legislator of the Sonia Gandhi-led party to contest the 2022 Goa polls on a Congress ticket as most of his colleagues switched allegiance to BJP. The other contenders are TMC’s Mahesh Amonkar and Lincoln Vaz of AAP.

Mandrem: Dayanand Sopte (BJP) vs Laxmikant Parsekar (Independent)
In the poll fray as an Independent, former Goa CM Laxmikant Parsekar will seek to defeat BJP’s official candidate Dayanand Sopte. A three-time MLA from Mandrem, Parsekar was sworn in as the CM on November 8, 2014, after Manohar Parrikar was inducted into the Union Cabinet. However, he suffered a shock defeat in the 2017 Assembly polls losing to Sopte who was in Congress by a margin of 7,119 votes.
Subsequently, Sopte switched allegiance to BJP and was re-elected from Mandram. Parsekar who was the head of BJP’s manifesto committee for the Goa elections quit the party after Sopte was again fielded from the Mandrem constituency. In Mandrem, Goa Forward Party and AAP have given a ticket to Deepak Kalangutkar and Prasad Shahapurkar, respectively.

Calangute: Michael Lobo (Congress) vs Joseph Sequeira (BJP)
A two-time MLA from Calangute, Michael Lobo was a Minister in the Pramod Sawant-led government until January when he resigned from the Cabinet as well as BJP. While Lobo accused BJP of sidelining those close to late BJP stalwart Manohar Parrikar, the CM asserted that the former jumped ship as the party was not willing to give a poll ticket to his wife. While Lobo will contest from Calangute on a Congress ticket this time, his wife Delilah has been nominated from the Siolim constituency. On the other hand, BJP has named former Sarpanch Joseph Sequeira as its candidate.

Sanquem: Subhash Dessai (BJP) vs Savitri Kavlekar (Independent)
Sanquem will see a unique contest with Goa Deputy CM Chandrakant Kavlekar’s wife Savitri fighting as an Independent from this seat. While BJP denied her a ticket, it gave a ticket to her husband from Quepem. Meanwhile, the saffron party has reposed faith in Subhash Dessai who won this seat in 2012. Congress’ Prasad Gaonkar, AAP’s Abhijit Dessai and Domacio Barreto of NCP are also in the poll fray.

Cortalim: Alina Saldanha (AAP) vs Narayan Naik (BJP)
Alina Saldanha, the first sitting BJP MLA to quit the party in the current Assembly tenure, will contest on an AAP ticket from Cortalim. She entered electoral politics by winning a by-election after her husband and former Minister Mathany Saldanha’s demise in 2012 and also retained the seat in the 2017 election. On December 16, 2021, she joined AAP in the presence of Delhi CM Arvind Kejriwal. This time, BJP has fielded Narayan Naik whereas Congress has reposed faith in Olencio Simoes who contested on a TMC ticket last time. (Republic TV)