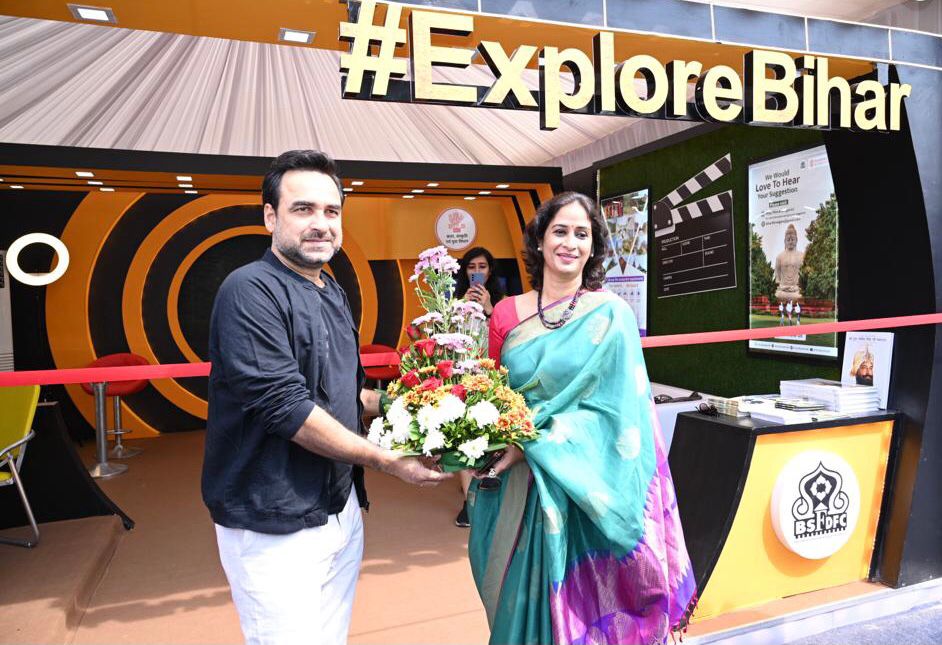 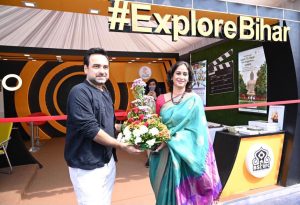 Goemkarponn desk
PANAJI: Anurag Thakur, Hon’ble Union Minister for Information & Broadcasting, Youth Affairs and Sports inaugurated the 53rd International Film Festival of India, Goa, 2022. IFFI Goa has been organised by National Film Development Corporation from 20th to 24th November 2022.
Bandana Preyashi, IAS, Secretary, Art, Culture and Youth Dept. Govt. of Bihar welcomed the Minister at Bihar Pavilion and showcased to him the creatives installed. The Minister congratulated the Secretary for putting up a wonderful Pavillion of Bihar at the Film Bazaar.
Afterwards,  Pankaj Tripathi, Bihar-based popular actor, remarked while inaugurating Bihar’s Pavilion at Film Bazaar- . “Having beautiful landscapes and virgin locations offer vast potential for film making and it’s great to see Bihar’s Pavillion at IFFI; Bihar should have participated  earlier in the Film Bazar.”
Bandana Preyashi, welcomed Pankaj Tripathi at the Pavillion.
Pankaj Tripathi was briefed by Bandana Preyashi regarding the immense film-making potential of the State.  She also talked about the recent initiatives taken by the Bihar govt, the improved security scenario, and rapid connectivity, thereby attracting the film industry to Bihar. She assured of all requisite support and invited Tripathi to Patna on his next Bihar visit for deliberation on the upcoming Bihar Film Policy. In the end, Tripathi got emotional, seeing Bihar’s locational graphics on its pavilion, remembering his old days in Bihar.