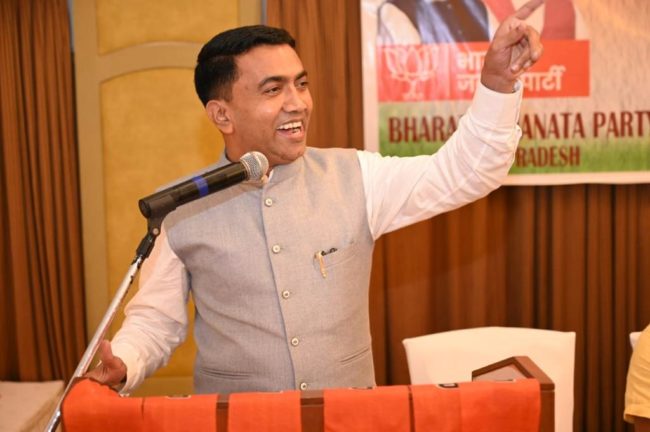 Goemkarponn desk
PANAJI:
Chief Minister Dr Pramod Sawant has asked teh BJP workers to work hard to re-elect the party to power so that the projects like Mopa and Zuari Bridge are inaugurated by them.
“BJP government needs to retain the power to inaugurate the developmental projects such as Mopa Airport and Zuari Bridge,” Sawant said.
CM said that opposition parties are hassled by BJP’s popularity and acceptance among the people, as a result of which they are forming an alliance in the hope to defeat the ruling party.
While addressing a meeting of BJP State Presidents and key representatives under the Booth Chalo Abhiyan-Expansion program at Panaji, Dr Sawant appealed to the party karyakartas to create further awareness about BJP’s achievements.
“The BJP has made all-round development of Goa in the last ten years. No previous government like the BJP government had created so many developmental projects. It is also the fact that the government led by Hon Prime Minister Narendra Modi Ji at the Center has much as much for India’s development. India hadn’t achieved this in the last over six decades,” Shri Sawant said.
Now with Goa going to polls early next year, the CM asked BJP workers to actively retain the party’s victory.
“Everyone should actively work for the next two months. Voters will not be attracted unless they know the works done by BJP. For this, the karyakartas need to reach out to the people and create further awareness about achievements brought in by the BJP government both at the Centre and the State level, be it in education, medical, or social sector or infrastructure. We want to retain the BJP government, and we all should work with this in our mind. The Opposition parties are now trying to form an alliance because they know it is impossible to defeat the BJP in Goa,” he said.
On this occasion, Union Minister Dr. Bhagwat Karad, State BJP President Shri Sadanand Shet Tanawade, Vice President Shri Kunda Chodankar, General Secretary Shri Damu Naik, General Secretary Advocate Shri Narendra Sawaikar, General Secretary (Organization) Shri Satish Dhond and Secretary Shri Sarvanand Bhagat were present.
The CM also emphasized that BJP has always considered the interest of the people.
“Whether it was the service during the COVID-19 pandemic, efforts to ensure safety and precautions, or the work of self-sufficient Goa or carrying out multiple projects. We have ensured the welfare of the people. We have been at the service of people in the last 10 years and want to continue working for truth and development,” Shri Sawant added.
Union Minister Dr Bhagwat Karad, also present at the meeting, said that BJP is the only party for the people and its workers while the other parties are like political families.
“It is only in BJP that a worker can grow into a great leader. Working for BJP is a service to the country, and this factor is missing in other political parties. We have many good leaders. Therefore, once again, we should try to form a BJP government and build a nation through it,” Dr. Karad appealed.
“Not only in the minds of the workers, but it should be in every voter that BJP should continue and be given a third consecutive stint in Goa. For this, every karyakarta needs to engage with the electorate,” said Tanawade.

Panaji: The Comptroller Auditor General has pointed out serious anamolies in the functioning of Goa Industrial Development Corporation including the allotment of plot, which the ... Read More

The outcome of the disqualification petition will have a wider impact across country: HC

Goemkarponn desk PANAJI: The Bombay High Court at Goa on Wednesday agreed with the petitioner's contention that the disqualification petition against ten ex-Congress MLAs will ... Read More