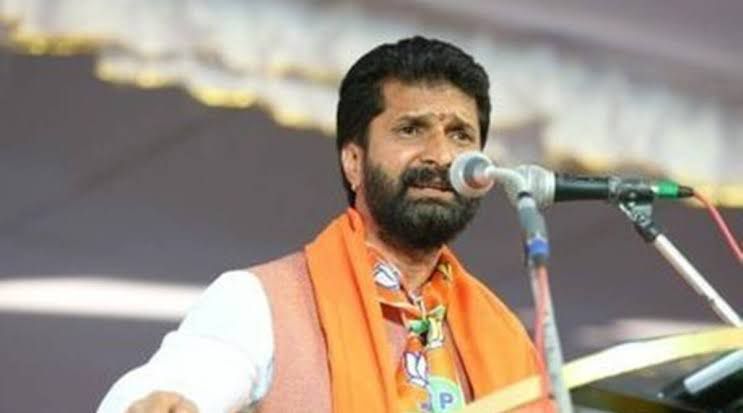 Goemkarponn desk
DIVAR: The BJP will win both Lok Sabha seats in Goa in the 2024 Lok Sabha polls, the party’s national general secretary and state in-charge CT Ravi said on Thursday, adding that the Congress’ penchant for dynasty would lead the party to its doom.
“Congress doesn’t have niti (policy), neta (leader) and niyat (intention). We will win both seats in the 2024 Lok Sabha elections in Goa… We will cross 400 across India. Because of niti, neta, niyat. The Congress is connected with dynasty; we are connected with development,” Ravi told reporters here. The central BJP official is in Goa to prepare the groundwork for the party’s Lok Sabha election campaign. “Earlier, there was policy paralysis; today is not there. In the ease of doing business India has risen from ranking 142 before 2014 to 63 now” he
also said.
He also said that the BJP government at the Centre
had extended the web of connectivity in the country
citing the example of the regime of former Prime Minister Atal Behari Vajpayee, who headed a National Democratic Alliance government.
“When Atalji was in power from 1998 to 2004, during
that time connectivity of the nation was expanded.
Telephone connectivity was sped up. Even
television connectivity prospered during Atalji’s
reign. Before that, there was only Doordarshan.
Only three to four programs were shown then.
Today, if you hold a remote, you can access 300 to
500 channels,” he said.
He also said that under Prime Minister Narendra
Modi’s regime, India was emerging as a global
leader.
“During the Ukraine and Russia war, not only Indian
students, those from Bangladesh, Sri Lanka,
Pakistan, and Nepal also held Indian flag to return
safely. This is the might of India now,” he said.
“When Rajiv Gandhi was Prime Minister in 1986, he
once said that if the central government sends 100
rupees then 15 rupees reach the last man. Today,
there are more than 300 schemes, if we send Rs.
100, then the last man gets Rs 100. This is our niyat,”
Ravi said.