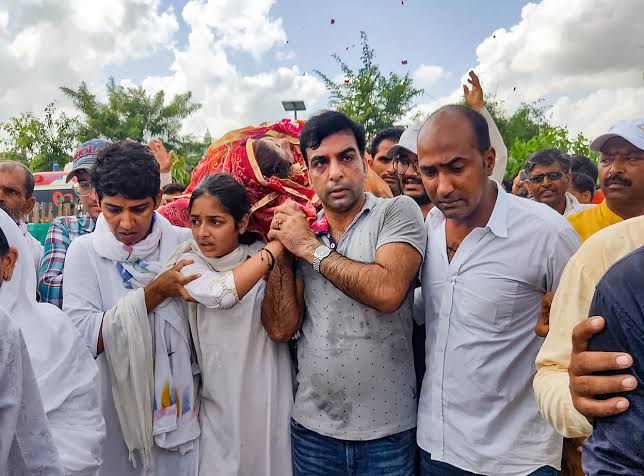 The daughter of actor and Haryana BJP leader Sonali Phogat shouldered the bier today as her mother was cremated amid a massive crowd of family and supporters. The tearful young woman was seen shouldering one of the four ends of the bier in videos from the spot. Her body was draped in a BJP flag.

A large number of people attended the last rites in Haryana’s Hisar after the 43-year-old leader died under mysterious circumstances in Goa. Two days after her death, the police appear to have made some headway in their investigations.

It was initially said that she died of natural causes — a heart attack — but yesterday Ms Phogat’s post-mortem report said that she had multiple blunt injuries on her body.

Citing CCTV footage from a restaurant and confessions from the accused in the case, the Goa police today revealed that she was forcefully drugged by her associates while partying at the restaurant.

Her family has alleged that her two associates Sudhir Sangwan and Sukhwinder were responsible for her death. Both have been arrested by the police now.

Ms Phogat’s brother-in-law Aman Poonia has alleged that her associate Sudhir Sangwan has killed her. She was raped and was being blackmailed by him, he said.

After initial reluctance, the Goa police registered a case of murder on Thursday.

Some BJP leaders are now supporting the family’s demand for a CBI probe in the case.

Comments “It’s a personal loss for me….there should be a CBI probe if the family is demanding so,” Haryana BJP MLA Kuldeep Bishnoi said.