Black Day for women in Mormugao , SC will do justice to women: Shraddha 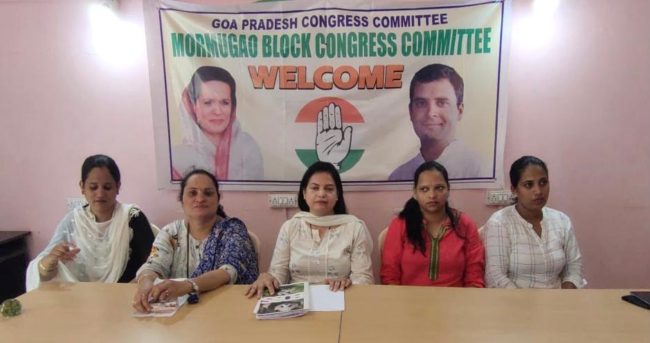 Goemkarponn desk
Vasco:
Women affiliated to Congress led by Petitioner Shraddha Sankalp Amonkar on Monday hit out at Urban Development Milind Naik on the occasion of Woman’s day for not having given even one candidature to women and failing to have reserved wards for women in the recent reservations. Amonkar said that though the Jai Tara Nari Welfare trust manged by her would celebrate International Womens Day every year for the last many years, the women in Mormugao decided not to celebrate the women’s day terming it as a black day for women in protest of the recent reservations.
Amonkar said that it was shameful and insult to the women fraternity in Mormugao constituency that besides not reserving wards for ladies ,the Milind Naiks BJP Backed panel had only gents as candidates and not even a single woman to represent any ward . Amonkar said that while BJP Government was claiming that women should move forward but at the same time the UD Minister was holding the women behind in politics . Amonkar said that despite the injustice to women ,Congress has fielded three women in the Mormugao Constituency for the upcoming civic polls.
Amonkar said that she had full faith in the Supreme Court and that the Supreme Court would offer justice to women.
Meanwhile outgoing councillor Bhavna Bhosle said that while women had reached top positions in the country, there was injustice to women in Mormugao Constituency