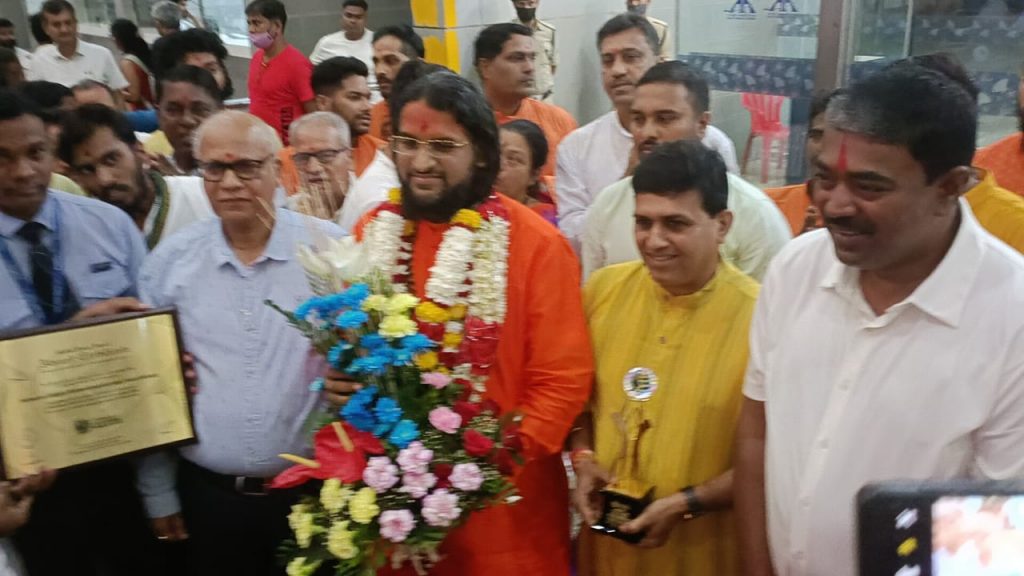 Goemkarponn desk
VASCO: H.H Sadguru Brahmeshanandacharya Swamiji, heading the Shree Datta Padmanabh Peeth on Wednesday, said that people must have faith in God and try to maintain peace in the society upon his return to Goa after being honoured with the Global Peace Award in Dubai.
Swamiji was given a grand welcome upon his arrival to the state by his devotees, who had gathered large numbers at the Airport.
Prominent politicians Margao MLA Digambar Kamat, Mormugao MLA Sankalp Amonkar and Vasco MLA Krishna Salkar also arrived at the Airport to welcome Swamiji and seek his blessings.
“A Dubai-based organisation for universal peace has awarded me with a global peace award on international peace day, and this award is for Goa, where people of all religions live in communal Harmony. People of all religions exist in Goa and maintain peace, and our achievements are being accepted nationally and internationally,” said Swamiji.
“We have seen that many places are witnessing tense moments over different reasons, and we have to spread our culture to these areas, and if all of us on an individual level try to spread this message, we can have peace all across the globe. People of all religions must continue to have faith in God, and once this is done, we will automatically feel that every person is a good person, and this will create a very good impact on society and this is why that everyone must have faith in God and put In efforts to maintain peace in the society ” said Swamiji
Margao MLA Digambar Kamat speaking to reporters, said that Bramheshanand Swami and Tapobhumi had a lot of contributions to Goa.
“I have been associated with the Tapobhumi Mutt for a long time, and I have seen their works very closely, including the introduction of female priests during Vada Punav celebrations which was the first time in history and made it successful. While Swamiji had been awarded a Padmashree in the past, he has now been awarded a global peace award, and this is because people have seen his work and people must follow the footsteps of Swamiji,” said Kamat.
Mormugao MLA Sankalp Amonkar said that it was a proud moment for Goa that a Swamiji from Goa had won an award at the International level because of his social work.
Vasco MLA Krishna Salkar said that it was a great honour that Swamiji was recognised for his good work, and the works were accepted at the national level when he won the Padmashree, and now the Swamiji works were recognised at an international level after he was awarded a global peace award in Dubai.