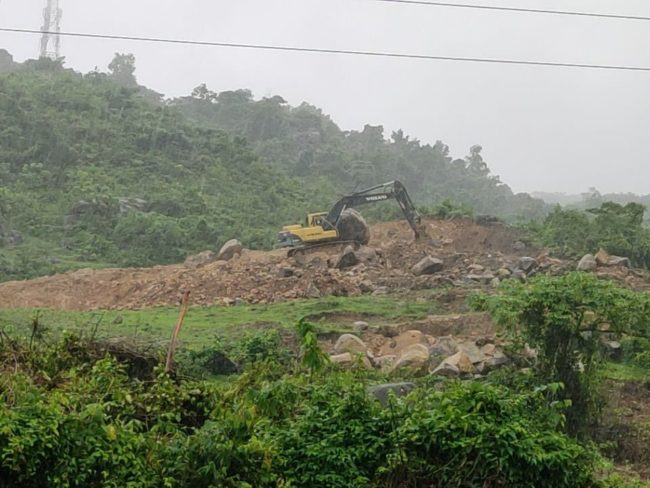 CUNCOLIM- Anticipating the pressure tactics likely to be used by the highly placed sources in the Government on Cuncolim Municipal Chief Officer to revoke the “Stop Work Order” issued for Cacanamoddi Hill Cutting, Cuncolim MLA Yuri Alemao has written a letter to TCP & Urban Development Minister Vishwajit Rane urging his urgent intervention to review the permissions granted by TCP and maintaining status quo on the Stop Work Order issued by Cuncolim Municipal Council.
In his letter dated 5th June 2022, coinciding with World Environment Day, Yuri Alemao has pointed out to TCP Minister Vishwajit Rane about the plot development started by some developers by destroying a Hillock in Cancanamoddi in Cuncolim. Yuri has also mentioned the Developer’s claims of having obtained all permissions from the Town and Country Planning Department to take up the developmental work of plots.
Cuncolim MLA has further stated in his letter that Upon looking at the massive hill cutting activity, the Villagers of Cuncolim lodged a complaint with Cuncolim Municipal Council (CMC) and looking at the destruction, CMC issued a Stop Work Order of the work. However, the Developers applied to TCP for fresh clearance, which was granted to them, sidelining the objections and opposition to the said work by the local residents of Cuncolim.
Yuri Alemao has further pointed out that the Stop Work order of CMC was challenged before the Director of Municipal Administration, upon which the Chief Officer of CMC is now being pressurized to revoke the stop-work order to pave the way for the destruction of the hill, which houses an aquifer underneath.
The letter also mentions that the place, namely Cancanamoddi, has a spiritual and sentimental connection with the locals as Cuncolkars believe that the area is under the spiritual control place of AJOBA ( Rakhno – The Protector of the Village ). The locals visit the nearby place of worship every Wednesday and Sunday with offerings of traditional “Soor Ront” to the Rakhandar. The locals also believe that the area around the place of worship needs to be kept away from any commercial development.
“Referring to your highly proactive approach and recent decisions in the TCP Department towards the conservation of nature, I request you to kindly review the above said permission and do the needful to stop the hill destruction. You are also requested to direct the Chief Officer of CMC to maintain the status quo on the Stop Work Order till TCP Department reviews the permissions granted for Hill Cutting at Cacanamoddi, Yuri Alemao stated in his letter,” he said.
Sources informed that the Cuncolim Chief Officer has issued notices to various persons who had filed objections against the massive hill cutting and informed them to remain present for a hearing on 8th June 2022. There is every possibility that the CO may come under pressure from higher-ups in government and may revoke the Stop Work Order of CMC, paving the way for developers to go ahead with rampant destruction.

Goemkarponn desk PANAJI: In the first round outcome that was announced on Monday, Goa topped the NITI Aayog state energy and climate index in the ... Read More

NEWER POSTBACK TO SCHOOL: Parents rush to pick children after the first day at School
OLDER POSTGoa highest consumer of fossil fuel in the country: Cabral