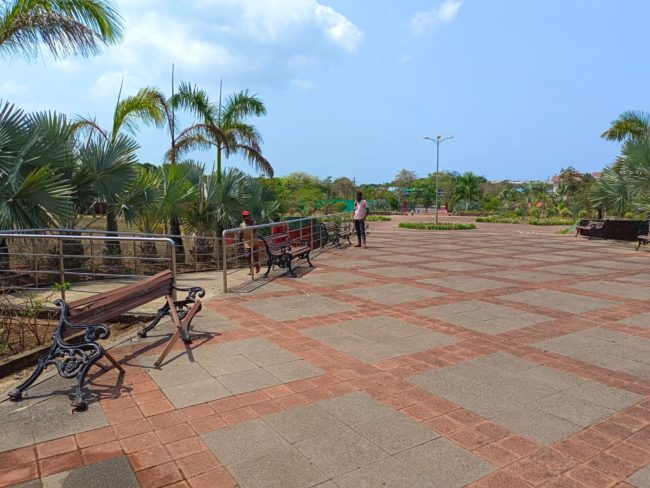 CHICALIM: Chicalim village panchayat to write to GSIDC either to give funds for the maintenance of Chicalim Joggers park or take it over by GSIDC for maintenance. Chicalim joggers park to remain close to the general public for the maintenance for four days.
Chicalim Sarpanch Sebastiao Pereira told Goemkarponn that the Chicalim joggers park would remain close for four days due to the ongoing repair works in the park, which received some damage to the pipeline and other minor things from the park when the second phase work of the park was in progress recently.
He further said that due to this work, the park would remain close for four days and later will be open for the joggers.
When questioned about the bad condition of the children’s play area, Pereira replied that a few years back, the panchayat had written to the GSIDC for the maintenance of this play area, and at that time, GSIDC had done some repair work.
He further added that for the watering of the park plantation, it requires 1 lakh liters of water which we have asked from PWD due to the insufficient water supply.
Pereira said for the maintenance of this huge Joggers park, lots of funds are required, which the Panchayat doesn’t have. Panchayat will write for the GSIDC to allot funds for the maintenance of this park or else to take over the park and maintain it at their own cost,” Sarpanch added.
It may be recalled that Goemkarponn had highlighted this issue on Wednesday in its edition. The authorities considered the emergency of this matter, and the repair works were taken up quickly.

GSIA asks CM to appoint ministers who are persons of integrity…

Govt will provide 100% tap water connections to all households before end of this year.

In what could be a major boost to tourism, Goa tourism has received safe travel stamp which will pave way for international tourists. “We're happy ... Read More