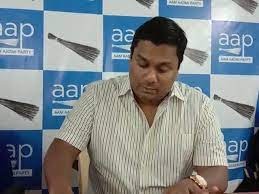 Goemkarponn desk
BENAULIM: Aam Aadmi Party (AAP) Benaulim Leader Captain Venzy Viegas today said that Churchill Alemao joining the TMC is a backside entry to support the BJP.
“What Churchill Alemao did is unacceptable, and the people should know about this. Today TMC is taking rejected leaders into the party. Alemao joining the TMC is a back way entry to support the BJP,” said Viegas.
He further alleged that the TMC supports the BJP case by case. He said the election in Benaulim is between a corrupt politician and an honest party.
“The people of Benaulim will vote for an honest party. Do not get blocked by that these parties as they have come to make the BJP win by splitting the votes,” he added.
Vegas said that Churchill is with TMC in turn, which means the TMC supports Chief Minister Pramod Sawant.
“TMC is inducting corrupt politicians; Churchill has done nothing for the people of Benaulim,” he claimed.
The AAP leader claimed that Churchill himself was on record when he told Sadanand Shet Tanavade that he will be joining the TMC, which means that TMC supports the BJP..
On Monday, Goa’s lone Nationalist Congress Party (NCP) MLA Churchill Alemao had claimed that he has merged the legislative unit of the party into the All India Trinamool Congress.
Alemao, who submitted a copy of the merger resolution to the office of Speaker of the state legislative Assembly Rajesh Patnekar, said he would be recognised as a Trinamool Congress MLA after the state legislative department issues a formal notification acknowledging his merger.