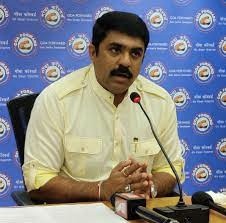 Goemkarponn desk
MARGAO: Goa Forward Party president Vijay Sardesai has claimed that the Congress-Goa Forward alliance is much stronger than any other options to send BJP home.
Reacting to the press briefing of Trinamool Congress party who has claimed that there is a game plan of Congress, BJP, and Goa Forward this election, people should vote for TMC, Sardesai, in his reply, stated that “In a democracy, anyone is free to contest an election. I have nothing to say about the candidates in the fray. However, having said that, “I want to say that having completed one round of campaigning, there’s almost a unanimous opinion amongst Fatordekars that the BJP need to be stopped from returning back to power and save Goa from total destruction.”
He further said, “I am confident that Fatordekars are wise enough and need not be told who is in a better position to defeat the BJP. Not just Fatordekars, but entire Goa knows that only the Congress-Goa Forward alliance is capable of taking on the BJP”.
Sardesai added, “I have full faith and trust on the people of Fatorda in particular and Goa in general that they would channelize their votes in favour of the Congress-Goa Forward party alliance to dislodge the BJP in the coming election.”
On Friday morning, TMC’snational vice president Luisinho Faleiro backed out of contesting the election from Fatorda and gave the opportunity to fresh candidate Seola Vaz to contest in Fatorda.
TMC had also criticized Sardesai for getting elected last time and later joining hands with the BJP government.