Destruction of Soil, Environment is a govt-sponsored initiative in Margao: SCM 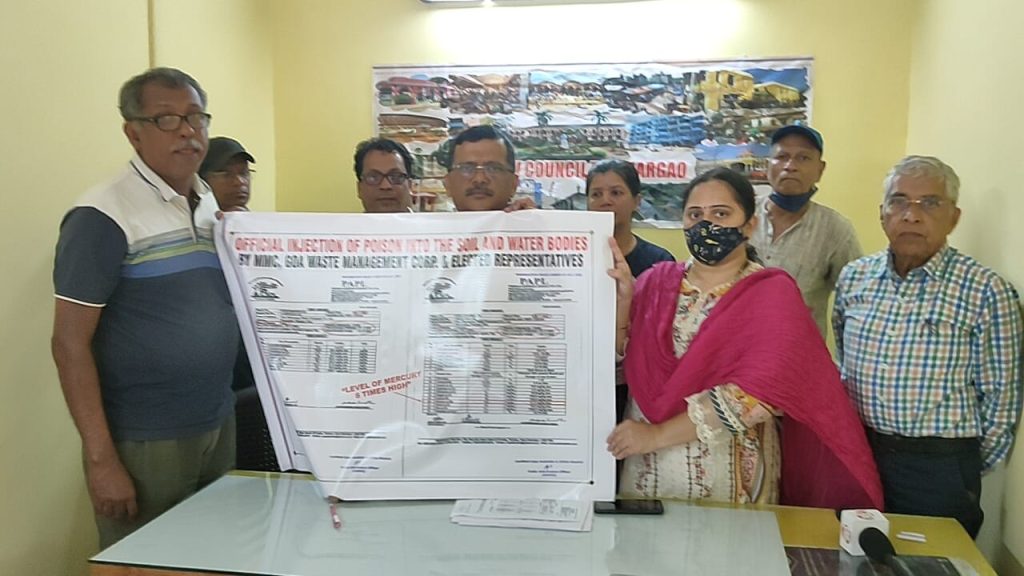 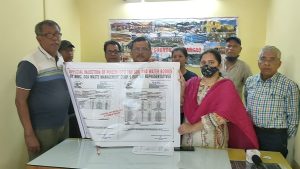 Goemkarponn desk
MARGAO: The Citizens of Margao, under the banner of the Shadow Council armed with documents obtained through RTI, charged that the destruction of the Soil, Environment, Ecology and groundwater table is today a government-sponsored initiative in Margao.
SCM Convener Savio Coutinho, along with prominent citizens including Candeth Castello, Adv. Snehal Onskar, Jose Maria Miranda, Maria do Carmo, Anthony Pereira, Damodar Onskar, Anthony Gonsalves and others listed details of the poisonous nature of the waste being dumped by the authorities.
“World Soil day was just celebrated a few days ago on 5th December, and on this very day, we received shocking information that government agencies like Goa Waste Management Corporation and Margao Municipal Council have embarked upon a mission to kill its citizens and the generations hereafter, with poisonous materials, as dangerous as MERCURY “, Coutinho stated as he displayed test reports conducted on the waste at Sonsodo Margao. And as these agencies do the damage, Goa State Pollution Control Board prefers to be a mute and blind spectator, he said further.
Coutinho further stated that it becomes important to let the general public and the authorities know about the hazardous nature of the waste, as Margao MLA Digamber Kamat is on record, claiming success in such operations of dumping garbage in low-lying areas of Margao.
A responsible public representative of the stature of Kamat, who claims that the operation of dumping waste at the SGPDA ground was a successful method of handling garbage, clearly indicates that he is all set to transfer the entire Sonsodo dump into the low-lying areas of Margao city.
Coutinho revealed that in response to an RTI application dated 27/10/22, the GWMC has furnished test reports conducted on the waste lying inside the Sonsodo shed/plant.
Whether it is a matter of coincidence or not, it is worth mentioning that the samples for testing were collected on 1st November 2022, that is, after our RTI application was filed.
According to reports furnished, tests were conducted on one sample each of Inert material and Compost.
With specific reference to the certificates of analysis obtained on so-called “compost”
“We are at a loss of words and action at the utter disregard of the powers that be towards providing the citizens and the taxpayer with a hazard-free environment. The GSPCB is regulating the noise levels at a stringent 10 pm but is showing little or no interest in the injection of poisons into our soil and, eventually, the groundwater table. And this will most certainly be a slow killer in the years ahead,” he said.
We demand to know from the Minister for Environment Nilesh Cabral whether the Goa State Pollution Control Board is to protect the Environment or whether it was a body to silently watch it getting destroyed.
“We had on 24/11/22 submitted 3 samples of the dumped waste, and on 7/12/22, the GSPCB themselves collected 2 samples from the site. We hope that the pollution control board does a sincere job and makes public the test reports of the samples at the earliest before the MMC and GWMC start another round of dumping poison in other parts of this city,” he said.
The citizens warned the concerned authorities to take up this matter before higher forums if they fail to act on this issue.