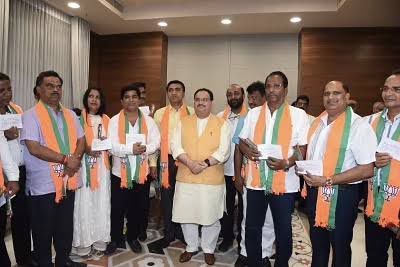 NEW DELHI: The Supreme Court of India today has issued notices to the Goa Legislative Assembly Speaker and 10 then MLAs who had quit the Congress to merge into the BJP.
Former GPCC President Girish Chodankar has approached the Supreme Court against the Bombay High Court verdict, which had upheld the Goa Assembly Speaker’s order dismissing two petitions seeking disqualification of 12 MLAs who had switched over from their parties to the ruling BJP in 2019.
However, the MGP had chosen not to approach the top court due to a financial crunch.
The appeal in the apex court stated that High Court had committed a “grave error” in upholding the Speaker’s order on the mistaken premise that since the 10 MLAs constituted two-thirds of their legislature party and had decided to merge with another party, they would enjoy the protection granted under Para 4 of the Tenth Schedule by invoking the “deeming fiction” contained in para 4(2).
Para 4 of the Tenth Schedule deals with disqualification on the grounds of defection not to apply in case of a merger.
In the 2017 elections to the 40-member Goa Assembly, the Congress had emerged as the single largest party by winning 17 seats; however, BJP, which won 13 seats, forged an alliance with some regional outfits and independents to form the government.