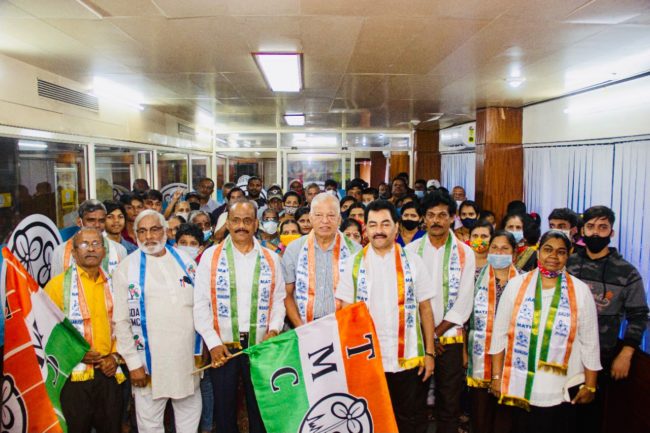 Goemkarponn desk
PANAJI: Today, AITC Rajya Sabha MP Luizinho Faleiro slammed the BJP for its remarks on Goa TMC’s alliance with the Maharashtrawadi Gomantak Party (MGP).
Hitting back at Goa Chief Minister Pramod Sawant, who recently remarked that the ‘culture of TMC & MGP does not match’, Luizinho Faleiro said, ‘Was it BJP’s culture to use the MGP to come to power and betray the MGP by robbing their two MLAs and then completely discarding them?’
At the same press conference, Faleiro also questioned AICC Goa In-charge Dinesh Gundu Rao for his confusing comments on the Congress’ alleged understanding with the GFP. Referring to Shri Gundu Rao’s statement of November 30, that there was ‘no decision yet on alliance with the Goa Forward Party’, Faleiro said, ‘They just raised their hands.
The handshake has not happened. They should worry about their MLAs and come out with a clean, clear, definitive statement on whether there is an actual alliance with GFP or not. He added that the Congress needs to come clean in front of the people of Goa and stop fooling them for once.’

Goemkarponn desk MARGAO: Pallavi Bhagat, Spokesperson of Goa Pradesh Congress Committee, has charged that BJP Government is all out to support only the capitalists and ... Read More

MGP has always insulted BJP leaders, should not be part of Govt: BJP blocks

Goemkarponn desk PONDA: Stating that the BJP has almost won a majority and that with support of Independent MLAs, it can form a stable government, ... Read More