Fish vendors to be shifted to new shed within a week: MMC 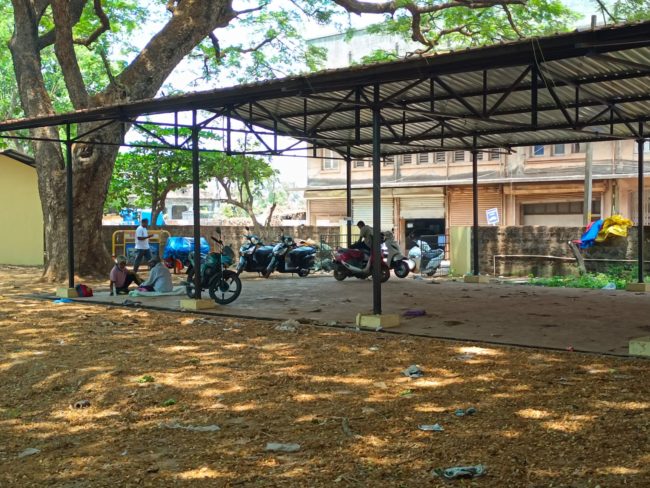 VASCO: Shifting of fish vendors from the existing fish market will be done within a week.
These fish vendors will be shifted to the newly erected temporary shed in Vasco, said Damodar Kaskar, Chairperson of MMC.
A newly-erected temporary fish market shed near Mormugao municipality has turned into a safe heaven for the beggars, homeless and a parking place for many people. The shed, which was built to temporarily shift the existing fish vendors from the old shed to the new shed, has been filled with plastic, food residual waste littered by the beggars. Many people are also using this shed for parking their scooters.
The vagueness in the issue of shifting of fish vendors has further delayed the utilisation of the temporary shed, which was built by GSUDA some months ago by spending lakhs of rupees.
On a visit to the newly erected temporary shed near the vegetable market of Vasco, it was observed that many beggars and homeless seek refuge in this shed to sleep and rest. Some underneath portions of this shed are filled with the food residual, liquor bottles and dry waste material littered by these beggars. There were scooters nicely parked in this shed by some people.
It may be recalled that the actual objective of this temporary shed was to accommodate the fish vendors from the old shed neighbouring the Khariawado area, which was supposed to be done when the work of the new fish market project started. But due to some unfinished negotiations between the Mormugao municipality and the Vasco fish vendors, the shifting of fish vendors never happened.
When questioned, Damodar Kaskar, chairperson of the Mormugao municipal council, informed that from Wednesday, the wholesale fish traders were barred from selling fish through their premises. Now once the fish vendors get confidence in them, we will shift these fish vendors to the new temporary shed within eight days,” Kaskar added.

Goemkarponn desk Panaji: The wait is over! Bharatiya Janata Party’s (BJP) manifesto for the upcoming Assembly Elections will be released at the hands of Hon ... Read More

A Chhattisgarh native was arrested for allegedly raping an elderly woman in Goa. Agacaim PI Vijay Rane said that the incident took place around 14 ... Read More