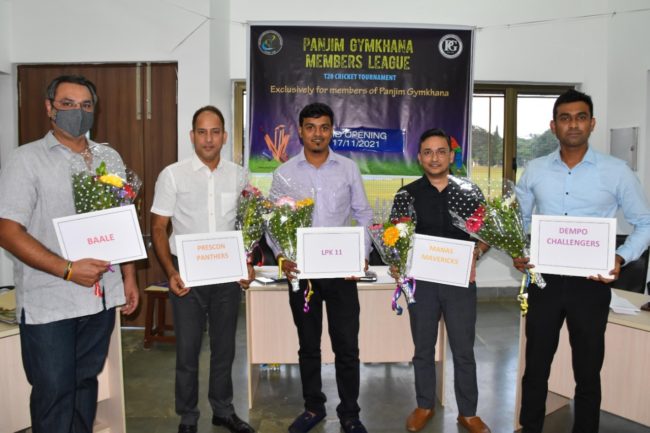 The highest bid by a franchisee team is INR 5.1 lakh
Player auctions to be held on December 4
Goemkapronn desk
Panaji: Five franchisee teams will slog it out to win the Panjim Gymkhana Premier League, a one-of-a-kind T-20 cricket tournament that is scheduled to kick-off in January 2022.
The five teams Baale, Manas Mavericks, LPK 11, Prescon Panthers and Dempo Challengers, won the bids to own the 5 teams as per the process selected by the League’s governing body, the General Council, following a bidding process in which seven bidders participated. In all 17 parties had sought to bid documents from the organizers.
The bidding process began on November 1, while the last day for submission of bids was November 15.
“The highest bid made by a franchisee team was 5.1 lakh to secure a spot in the unique League,” according to honorary secretary of the Panjim Gymkhana, Rajesh Khaunte.
“With the coming together of five teams, the first stage of the Panjim Gymkhana Premier League organization has been completed. The next exciting stage is the auctioning of players, which is scheduled to be held on December 4. This is one of the first attempts to form a T-20 league exclusively for Goan teams and players. We are excited at the prospect of the Panjim Gymkhana introducing this innovative format and concept, which will help budding cricketers in Goa to flourish,” Khaunte also said.
The five franchisee teams are now expected to bid for players on the basis of a points system to secure players to set up their respective dream teams.
The registration of players for the League has already started, and all available players will be segregated into various categories by the League’s governing body, the General Council, like marquee players, top order/middle-order batsmen, pace/spin bowlers, wicketkeepers, etc.
Each team will be allotted a kitty of two crores points which have to be used to buy a player from the pool through bidding. A maximum of 15 players can be brought by a team owner.
The PGML matches will be held largely over the weekend (Saturday and Sunday).
Located along the picturesque Mandovi river, the Panjim Gymkhana, established in 1963, has been recognized as one of the oldest and premier sports clubs and is considered the nursery of cricket in Goa.

Derrick Pereira: We are a much better side than what the table shows

Goemkarponn desk FC Goa remains rooted to ninth place on the ISL points table courtesy of another defeat, this time at the hands of Hyderabad ... Read More