From Patradevi to Polem DIRECT CHANDRAR

Goemkarponn desk
PANAJI: While the Central government has sanctioned thousands of crores of rupees for the widening and relaying of the National Highway 66 (NH17) from Patradevi to Polem, the ongoing work has become unmotorable and risk to lives of the commuters.
For past three years now, the work on the widening has been underway while the work on stretch from Patradevi to Bambolim has been handed over to M/s MV Rao, the Bambolim to Verna stretch is being undertaken by M/s Dilip Buildcon, which also includes 8-lane Zuari Bridge.
But unfortunately, right from Patradevi in Pernem taluka to Polem in Canacona whether there is digging or unfinished roads.
During monsoons the issue becomes more dangerous due to potholes and mud washing on to old roads. 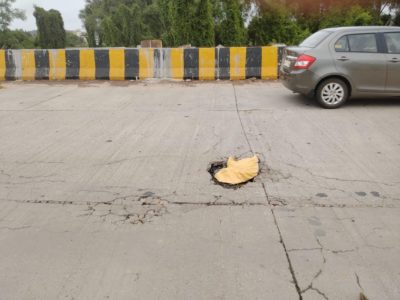 For the second time in last one year, the concrete flyover over Karaswada junction has developed potholes, which has become dangerous to motorists.
Activist Damodar Divkar says, the bridge has been washed at the beginning of this Monsoon developing several cracks and concrete has vanished at most of the places here and inside steel used for concrete, is clearly visible due to inferior quality works.
“It’s shocking to see the cracks and scaling of concrete surface layer on this newly built bridge,” he stated adding this is due to usage of high quantity of fly ash, low quality materials, and improper curing resulted in all these problems. 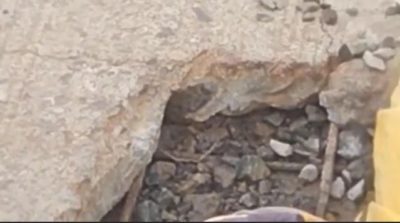 “PWD were supposed to ensure there are no cracks and other problems on cement roads, as all these are not repairable like tar roads. Also, PWD are constructing concrete roads with strength of M-45 at a high cost, so there should be no question of cracks. People will have to face serious problems in future as cracks and scaling of surface layer tend to increase,” he said.
The road right opposite Bambolim cross, near IPHB too has developed huge cracks putting a question mark over the quality of work.
Not just this, the flyover opposite 3TTR, at Bambolim, has also developed huge cracks and the PWD inspection has revealed sub-standard work.
Similarly, the road between Patradevi and Dhargal has become a death trap due to the ongoing four-lane work and yet the authorities appear least bothered to do anything to arrest the increasing number of accidents.
The work of NH- widening commenced in 2018 and since then 20 people have lost their lives. In the same year, 51 accidents occurred on this stretch of road, in which 70 suffered major injuries while 11 died. In 2019, 52 accidents occurred in which 41 were injured and seven died.
In 2020, 18 accidents have occurred in which seven were seriously injured, while two died. Most of the injured have suffered permanent disability.
Despite several agitations and road blockades by the people of Pernem demanding steps for preventing accidents, the authorities and the highway contractor have not done anything to mitigate the situation.
Several representations were also submitted to the Pernem deputy collector, mamlatdar and the police demanding criminal action against the highway contractor for failing to put in place safety measures to prevent accidents. However, no action has been taken against the contractor till date.
“Work of the highway extension is going on without keeping the security of the commuters in place. Due to the irrepressible attitude of the people, several families have been destroyed wherein they have lost their bread earners. The government should take strict action against the highway contractor and a criminal case should be filed, “added Siddhesh Sawant, another local.

Poor workmanship…
Top engineers in the PWD told Goemkarponn that the workmanship is poor and no action is being initiated by the PWD or the government as the contractor is a highly influential person.
PWD EE speaks…
PWD Executive Engineer Atmaram Gaude said that the cracks which has appeared on concrete would be repaired.
“I was on leave due to sickness and will check for myself what the status now is. However, the PWD will get the repairs done to the satisfaction. The contractor is bounded by the agreement,” Gaude said.