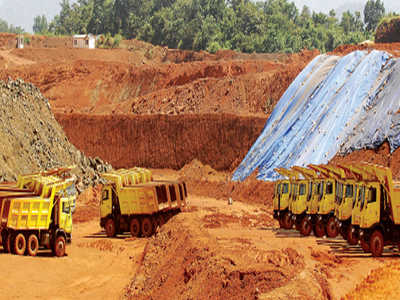 In a series of consultations, the Ministry of Mines has proposed a complete change in the way inherited mineral wealth would be managed, ignoring the National Mineral Policy 2019, and in violation of the rights of future generations, the right to equality and the constitutional structure of federalism. Goa Foundation responses to these consultations are attached.

The Goa Foundation feels the Government of India is now for reasons best known to it, willing to sell off the family silver at a massive discount.

A press release issued Under our Constitution, sub-soil minerals are a shared inheritance, owned by state governments as trustee for the people and especially future generations. Mining is the sale and disposal of this inheritance, and the constitutional goal is zero loss in value during the financial transaction – any loss would violate the right to equality.

“The proposed changes to the MMDR Act would essentially enable the Center to force states to sell their family silver at a below-market price that the Center sets. The proposed prices are vastly lower than the market price of the minerals – the royalty + auction premia on auctioned merchant leases,” it says.

Further, Goa Foundation adds, this amounts to a grant of largesse to the beneficiaries, while cheating the state and future generations of their wealth. It also favors some miners over others. This is unconstitutional and an invitation to prolonged litigation. It’s also taking two steps backwards, after the law was changed to allow only auctions of mineral wealth.

“The National Mineral Policy 2019 provides for a number of safeguards, including an inter-ministerial body including representatives of state governments to decide on aspects like whether we should sell our family silver, when we should sell it, and on what terms – royalties, etc. Without constituting this body, the Ministry has proposed specific conditions for sale of the family silver to be incorporated into the  MMDR Act. How would states then fulfill their duties as public trustees to conserve the shared inherited mineral wealth if they have no control over if, when or how they sell their family silver? How would states meet intergenerational equity? These proposals violate the principle of subsidiarity and the federal structure of our Constitution,” Goa Foundation says.

It further says the Supreme Court has already held that the grant of mining leases is a prerogative of state governments. How come the Central Government wants to usurp that power?

“Since minerals are our inherited wealth, and mining is the sale of this wealth, the sale consideration received in exchange for the minerals – royalties & auction premia – are capital receipts, just like the proceeds from divestments. Royalties & auction premia are not revenue. Are we addicts to sell off our family silver to consume the proceeds? Surely a strong nation is one that imports raw materials from others and exports finished goods, not one that is exporting its family silver for a song?” it says.

Moreover, GF says, since minerals are our family silver, prudence requires a high security minerals supply chain to ensure no theft or loss of this wealth. Illegal mining is effectively theft of the family silver. In the financial sector, anyone who is of even slightly questionable antecedents would not be allowed to manage a bank or financial institution. However, it is distressing to find that there is no blacklisting of illegal miners either under the Mineral Auction Rules or the Insolvency & Bankruptcy Code, nor is illegal mining considered money laundering when minerals are clearly associated with our red corridor. It is essential that fit & proper person tests and integrity due diligence be conducted on all participants in mining. In its absence, we have thieves managing the family silver, with obvious results.

Goa Foundation feels it is unfortunate to see that the ministry has repeatedly violated the pre-legislative consultation policy and the RTI Act in formulating and announcing these proposals. And we are shocked to hear that of the 12,149 comments the ministry received on the consultations on the draft MMDR amendments held in 2020, the ministry has considered only those suggestions “which are committed for reforms in the sector.” Put simply, the ministry only listens to those who agree with its increasingly backward-looking reforms.

“We urge state governments to urgently examine the consequences of these proposals on the federal structure of our union, the constitutionality of these proposals especially in light of their role as public trustees over the shared inheritance of mineral wealth on behalf of the people and future generations,” it says.