Goemkarponn desk
PONDA: The various highways in Ponda, Dharbandora Taluka, including bypass roads of NH Highways and internal, greets tourists have become an eyesore due to garbage dumps.
Usgao, Khandola and Bethora locals, where garbage is dumped at the roadside, demand action against violators.
The Locals at Usgao and Ponda demanded that the Panchyat bodies take action against culprits involved in dumping garbage which emanates a foul smell and causes nausea. 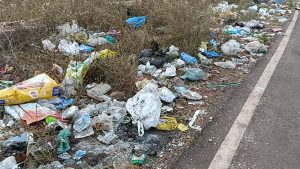 Right from Tisk Usgao bypass, Bethora Borim Bypass, Bythokhol road, the road leading to the inter-State KTC bus stand and roadside near Khandola College, garbage greets tourists with an unpleasant look.
It’s now many years since these scenes prevail, but now the garbage dump gradually turning into a mountain is giving the roadside an ugly look.
The Panchayat bodies cleared the garbage the violators continued to dump, so locals suggested a CCTV system. Curti Panchayat had installed a CCTV system at some places to keep watch on people causing garbage menace.