Goa Panchayat polls: BJP claims victory on at least 140 out of 186 seats 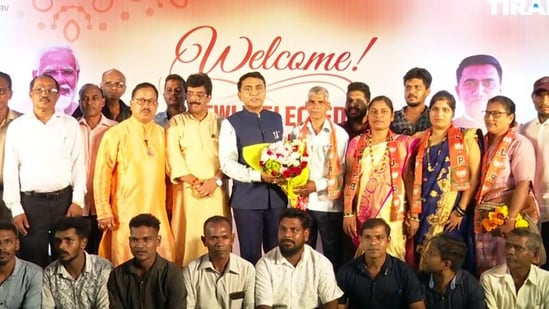 Goemkarponn desk
PANAJI;  Bharatiya Janata Party (BJP) claimed victory on 140 seats out of the 186 village panchayat bodies that went to polls on August 10. Goa chief minister Pramod Sawant welcomed the victorious BJP candidates and said that the electoral outcome will be appreciated by the central committee.

“The elections to 186 panchayat bodies in Goa were conducted on August 10. The results have been declared, and we have won over 140 seats. Assembly, Lok Sabha and now Panchayat elections we swapped this shows our work. I am sure the Central committee will appreciate it,” said Sawant.

The Goa CM asserted that the massive win will help the BJP government in the state implement its programmes at the grassroots level effectively.

The fate of 5,038 candidates, who were in the fray in 1,464 wards, was sealed in ballot papers on Wednesday. Panchayat elections are not fought on party symbols but the candidates are backed by the political parties. The counting of votes for the elections to 186 panchayat bodies in the coastal state started at 8am on Friday.

Several BJP leaders claimed that their party won the panchayat bodies in their respective constituencies.

BJP’s state unit chief Sadanand Shet Tanavade said it is the first time that any party has won so many seats in the Goa Panchayat elections.

“Though the election was not fought on party symbols, the results indicate BJP workers won in majority of panchayats,” he said, claiming that Congress received shocking setbacks in some villages.

Goa had reported a 78.70 per cent voter turnout for the panchayat elections.

(With inputs from ANI, PTI)