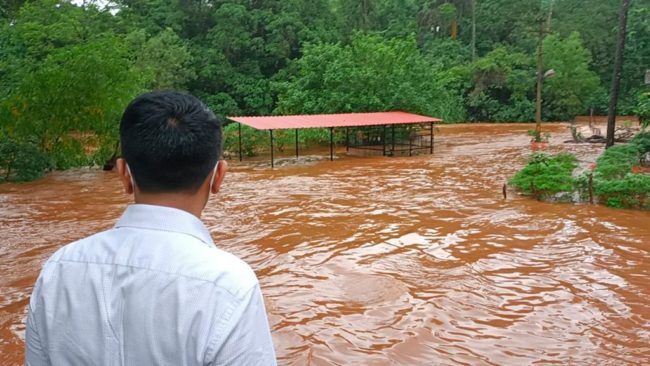 Goemkarponn desk
BICHOLIM: The worse nightmare of the flood of Sal villagers came haunting even this year with several houses getting submerged underwater as Tillari dam water was released at night.
It may be recalled that last year following the release of Tillari water, the entire village of Sal and its surrounding areas were partly submerged. Several houses were submerged. Massive loss of property was reported, and even some cattle were carried away in floods.
Even this year, the villagers had sighted this danger, and the authorities had kept a boat stationed in the village. Today, because of heavy rainfall in the Ghar reason, the Tillari water was released at night, resulting in Sal’s floods.
“Tillari water is the main cause of flooding today. Besides this, there was high tide, and water entered the houses in low-lying areas.” Deelip Desai from Sal told.
Water entered Shops and the Bhumika temple at night. Water entered several houses, and their contact with other villagers was broken. Till afternoon water did not receive, and there was no way to know the wellbeing of these villagers.

“The electricity current in the village has gone as the transformer that supplies light to the village is underwater. We don’t know when it will be resumed. We had demanded to shift the transformer, but the department did nothing,” Desai said.
Amit Parab, a shopkeeper, is the person whose shop got submerged in water and electronic equipment like the refrigerator got damaged.
“Since last two years, we are reeling under the threat of floods, and two years back, my entire shop was submerged underwater. I had requested compensation, but I did not get anything.” Parab claimed that every year he suffers losses, but the government is turning Nelson’s eye.
He feels that the government should take appropriate measures to control floods. In the morning, the local MLA and the speaker, Rajesh Patnekar, visited the site and took stock of the situation.

Valpoi Critical
Due to continuous and heavy rainfall, River Mhadei has been overflowing and the rainwater has entered different parts of Valpoi.

“We have been awake the whole night getting in touch with our people, workers & supporters. Necessary directions have been issued to the collectors to have the Disaster Management team stationed at Sattari & Usgao, Health Minister Vishwajit Rane said.

Locals essential has entered their houses, causing a lot of damage.
“It is very important for us to ensure our people’s safety. With the intervention of the Disaster Management Team, they will be shifted to safer locations. I have requested the concerned officials from the department of WRD, Fire Dept, PWD, Deputy Collector & Mamlatdar to monitor the situation closely,” Rane said.