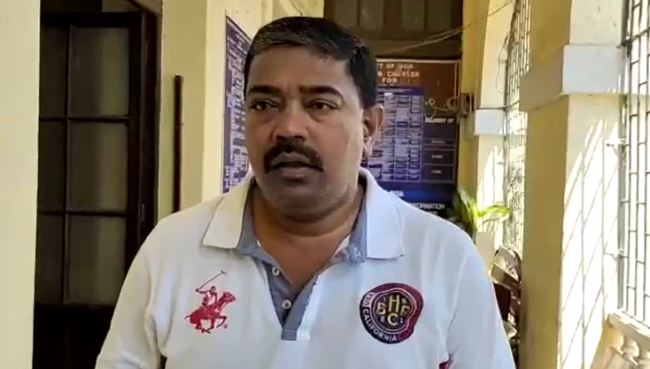 Goemkarponn desk
Panaji: GPCC Vice President Sankalp Amonkar on Thursday said that he had full faith that Supreme Court will uphold the constitutional rights of the people and though there is a stay, the final victory will be that of the people
“We are unaware of the exact order of the Supreme Court but we are only aware that the Supreme Court has stayed the HC verdict. This created a confusion and since today was the last day for nomination, many people rushed to the Dy Collector who informed that he had not recieved a fresh order and hence nomination cannot be accepted ” said Amonkar
” The SEC had issued a notification mentioning that the elections for the 5 municipalities have been postponed as per HC verdict and the code of conduct was lifted and a new notification has not arrived. ”
Amonkar said that he had full faith in Supreme Court and that it would uphold the constitutional right of the people
” Only the petition of Sanguem Municipality has been heard while the our petitions will come for hearing on 8th March and this is only a stay and final disposal will be on the 9th March and we cannot accept that the reservations will be unchanged and the election process will be suddenly announced and we have full faith that Supreme Court will uphold the constitutional right ” said Amonkar
Amonkar said that the people were forced to go to courts because of injustice to women and people from SC ST and OBC
” Government went to high court and Supreme Court at public cost only to show their dadagiri and they are trying to show they have got a victory with a stay in Supreme Court but we are sure that the final victory will be of the people who have gone to courts for justice at their own Costs unlike the government which is squandering public funds. This government does not care for people and has taken them for granted and the Urban Development minister Milind Naik failed in his duty and is responsible for this fiasco where public money is being wasted ” said Amonkar