* Six arrested, trucks and rickshaws seized for theft and transportation of PDS grains to Karnataka for sale 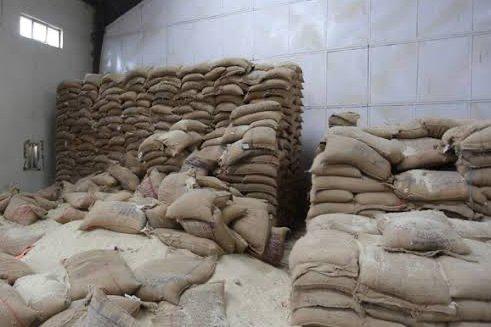 Goemkarponn desk
PANAJI: In a significant scam, the Crime Branch and the Directorate of Civil Supplies raided the State-run godowns and arrested several for allegedly trying to siphon off grains meant for public distribution to sell in Karnataka.
This comes at a time when the department was reeling under criticism over damaged toor dal accounting for over 400 tonnes.
Goa Civil supplies, as well as the Crime Branch, allegedly raided their godowns and unearthed a scam.
As per sources, the raid is in connection with a scam related to rice and wheat meant for public distribution being siphoned off and sold to traders in Karnataka.
Sources said six to eight people had been arrested, and several tonnes of grains had been seized in the raid.
Vehicles used for the illegal transportation of grains have also been seized.
Authorities have also sealed Civil Supply godowns at Sanguem, Quepem and Kundaim, sources revealed.
Two civil supplies inspectors have also been placed under suspension in the matter. Further details are awaited.
Neither the Department nor the Crime Branch officials were ready to comment on the development.
Meanwhile, Goa Forward President Vijai Sardesai said that the pilferage of 20 tonnes of wheat and rice from right under Dr Pramod Sawant’s nose comes after no action in the 241MT Tur Dal Scam.
“Even after I wrote PMO India! Karnataka takes our Mhadei water; now food, stop protecting cronies and take action,” said Sardesai.
Recently, after the toor dal scam was unearthed in the department, the then Civil Supplies minister Govind Gaude claimed that bureaucratic negligence resulted in the rotting of 241 tonnes of important kitchen staple – tur dal – during the COVID-19 pandemic in 2020.
Gaude said that he instructed bureaucrats to handle excess foodgrains stored in godowns. “I will not term it as a scam, but it is certainly negligence on part of the bureaucracy due to which the tur dal was left to rot,” said the minister.